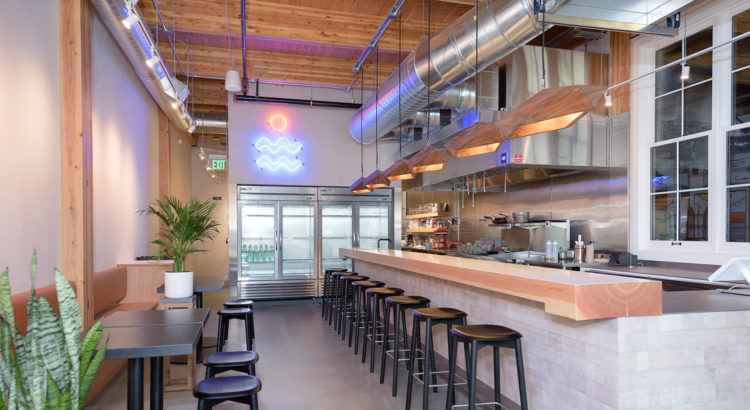 Victor Steinbrueck is behind Local Tide, his first brick-and-mortar space since operating a pop-up in the Pike Place Market Atrium. While he’d initially envisioned to open a permanent location at Pike Place, he found out about the open space in the Cedar Speedster building from his friend Jack Lamb, owner of Aslan Brewing. Aslan doesn’t offer food, so they built out the space to have a connecting window into Aslan where brewery customers can order food.

“We want to provide an opportunity to educate our customers on sustainable practices of sourcing seafood in the region, the variety of local species outside of the staples (salmon, halibut, and crab), and reframe the conversation around fish as an everyday option,” Steinbrueck said in a statement about the opening.

“We aim to shed light on the nuances of the process and highlight those companies doing it right. At the end of the day, we want to serve good tasting quality food that makes people want to come back and bring their friends!”

The menu is heavy on seafood sandwiches with options such as dungeness crab, salmon, rockfish, or fried sole.

Brilliant time to open a Restaurant.

And you’re in my front yard too. And apparently on our city council too. Now, please leash yourself, pay the fees, and don’t bark after 9 PM.

Did you consider these “business people” were beginning this place a long time ago. Unlike our modern politicians, who wet their fingers, then trust em into the air to make policy, business oriented folks are different, and bet with their own $$. Hey, somebody must cater to the nuevo-riche limousine liberals in Ballard Terry. I know you know this.

Brilliant time to open a Restaurant.

There’s nothing local about a Yelloweye rockfish; ESA protected in Puget Sound, Washington Coast and equivalent in Canada in the Strait of Georgia.

Have sexual congress with yourself.

A wannabe ichthyologist too! Do you get all your fish facts from a food nutritionist, like your immunology facts?