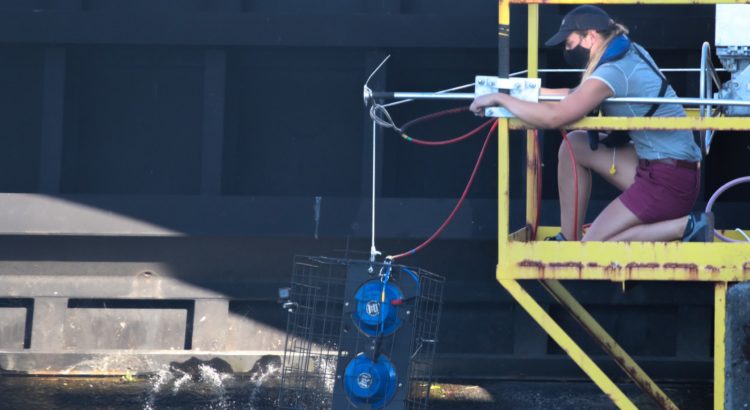 In an effort to improve salmon stocks, an underwater sound device has been installed at the Ballard Locks to keep seals away from the fish ladder.

A group of partners—including the U.S. Army Corps of Engineers, Oceans Initiative, Long Live the Kings, University of St Andrews, Genuswave, Puget Sound Partnership, Washington Department of Fish and Wildlife, Muckleshoot Indian Tribe—worked to create the Targeted Acoustic Startle Technology (TAST) which has been deployed on the west side of the Ballard Locks. The intended use is to deter seals and protect salmon as they attempt to reach the Lake Washington Ship Canal through the fish ladder.

“Seals and sea lions are known to linger at this migration bottleneck and consume large numbers of salmon returning to the spawning grounds. If successful, the device may help recover dwindling salmon runs, without harming marine mammals,” a press release from Long Live the Kings explains.

The locks migration bottleneck makes for an easy salmon dinner for seals, but the TAST will hopefully change that.

Scientists from the Seattle-based conservation research nonprofit Oceans Initiative will be monitoring the summer and fall salmon migration and the effectiveness of the sound device.

“Everyone at Oceans Initiative is excited to see whether this benign use of acoustic technology can protect endangered salmon, without harming seals,” scientist Laura Bogaard said. “During the first week of observing with the TAST on, it feels like the seals have shifted away from the fish ladder compared to observation days when the TAST was off. We are keen to see if this observation is also reflected in our data when it comes time for analysis.”

Depending on the effectiveness of the device, it may be deployed in other areas prone to heavy salmon predation. The TAST being used at the locks emits sound at volumes that won’t harm either seals or sea lions, and at frequencies outside the hearing range of salmon and other marine animals, including orcas.

The Ballard Locks are still closed to pedestrians, but when it reopens, visitors may be able to see the device in action or see scientists observing seals and sea lions.

You all tried this about five years ago. It didn’t work. Sorry but if you want to save the salmon from the sea lions, a 30-30 is very inexpensive and effective. There are too many sea lions anyway. Salmon are more important.

you “may” be thinking of another technology, not this one.

You must’ve just moved here. And just what we need; another expert. Stick with your day gig.

Low cost conventional technology, with permanent results, should be the preferred solution. That is now the plan for sea lions and seals on the Lower Columbia. Something like 850 lethal removals. They won’t be shooting them, but trapping, netting and then a lethal injection. Seems like the .30-30 might be a better and quicker solution.

Yep target practice ! Are seals good to eat ? May be we need to put a bounty on these animals too ! Wow fresh sea lion or seal meat !

“FisherySafe™ acoustic technology works by triggering the fundamental mammalian startle reflex with which the animal protects itself from harm. A signal within a frequency range where the group of target species is more sensitive than the non-target species is used. This signal triggers the startle reflex which is then followed by a flight response and the animal is conditioned to avoid the area. Animals do not habituate to the reflex; repeated exposure typically leads to increased responsiveness.”

Seems to be a good product…https://genuswave.com/company/

Perhaps it will work at Ballard Commons.

No need for this at the Commons. Just some REAL true leadership, along with non-gullible residents, willing to actually stand for something. We need a true patriot prosecutor to use the laws currently already on the books. We don’t need to close jails either.

Paintking announces his run for President of Ballard. You heard it here first on MyBallard!

Now if they could only manage to pass the muck and suq gillnets covering 90% of the waterway… 9/13 just wait and see. Who’s checking how much chinook bycatch gets hit by those “coho” nets?

Good luck ! And this is costing us how much money ?

Approximately 0.000001% of the 2019 military budget, although this project actually has a chance of accomplishing something.

Hope this will work. Pretty hard to keep these hungry guys away from the “All You Can Eat” Buffet at the locks!
There was quite the contest several years back with “Herschel” the seal lion! They even took him down to California and he made is way back here! They would keep score and post it in the paper after the different methods and it was always “Herschel” the winner!

A bow and arrows on string to haul in the seals would work too I never ate seal meat but will try it if it is legal to harvest ! We need a season to harvest seals for food ! that would be a lot of seal meat !

You could ship it everywhere in sealed envelopes.