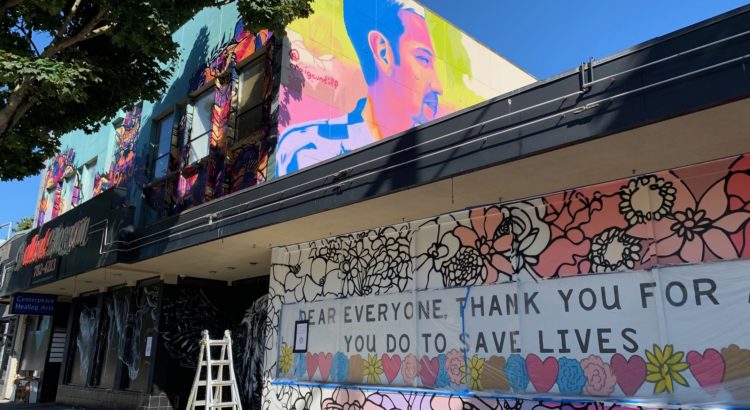 The project to transform the graffiti-covered former Ballard Blossom building is complete, with murals from five local artists now encasing the vacant building.

The project was spearheaded by the Ballard Alliance and the Ballard Public Art Committee, who chose the five artists and organized supplies and access. The mural now covers two sides of the two-story building at 1766 NW Market St.

The Ballard Alliance did not fund the project; rather, they’ve set up a GoFundMe to source community funding to pay the artists. The Alliance says that each mural shares a message and that each is connected through floral elements as a nod to the former building tenants, Ballard Blossom.

Craig Cundiff painted the top left east-facing portion of the building. “I’m basing the concept around honoring the LGBTQ community, which has a lot of roots in Ballard. I’m also keeping it anchored to Josie and Victor’s floral theme and lighter palette,” Cundiff said.

Dozfy, known for his art depicting animals on a black background, chose subjects that are often represented in Norse culture. He painted the groundfloor south-facing wall and a portion of the east-facing wall.

Josie Rice, famous around Ballard for her vibrant floral designs, covered half the ground floor south-facing wall and the north-facing ground floor space.

Juan Angel Roman (aka Nepo) “channeled old Ballard through tattoo-style art,” adding an element of social justice to each aspect of his piece. His work is on the top right, east-facing wall.

And finally, Victor Melendez’s mural depicts the cultural influences of his Mexican American background, with extravagant colors and flora and fauna covering the front of the empty building.

13 thoughts to “Former Ballard Blossom is now covered in murals”