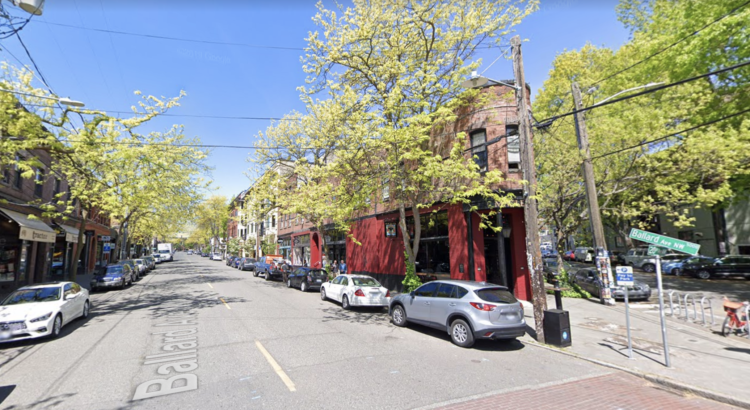 In an effort to support downtown cafes, restaurants, and retail stores, two blocks of Ballard Ave will temporarily be converted to one-way traffic.

Working on behalf of Ballard Ave business owners, the Ballard Alliance received a temporary permit from SDOT to modify traffic flow on the 5200 and 5300 blocks of Ballard Ave (between 20th and 22nd Avenues NW). As of yesterday, Sept. 1, traffic is now only be permitted for northbound travel. The permit will expire in six months; on March 1, 2021.

According to the Alliance, “the goal of the traffic flow modification is to allow businesses, who have obtained a Street Cafes and Merchandise Displays permit, a greater footprint in the parking and street area in front of their business.”

The permit now allows for businesses to expand to 12-feet in front of their businesses (where previously only seven feet were permitted) and allows for canopy structures.

Deliveries and curbside pickups will remain open in the northbound direction, and street parking will still be available in designated spaces along the one-way stretch.

So far, 10 businesses along the modified section hold the street cafe/merchandise display permit, with more expected to apply in the coming weeks, the Alliance says.

Why not just close the whole street? Who needs to drive on Ballard Avenue?

And what about the businesses on either side of this closure? Just close the entire street down! Businesses between 22nd & Market / South of 20th are also trying to survive. This is so f*ing frustrating!

Get lazy people out of their cars and support the businesses.

I don’t understand how this relates to my comment & the need for an expansion of the street closure.

“Get lazy people out of their cars”

I know that someone will comment about deliveries. But that can be worked around. Deliveries from 5am-10:30. Street closed at 11am, with dropoff zones/Handicapped parking at the street ends.
Entirely closed ballard ave would be a great place to spend some time.

delivery schedules are often times not quite that simple. one traffic incident (accident, bridge malfunction, etc) can throw a whole day off, not to mention the fact that many delivery trucks are going all over the city usually either from south to north or vice versa – they can’t just change their route so easily.

Delivery delays are an issue whether Ballard Ave is closed or not. Delivery companies are flexible and will figure it out, as they do for other streets that close around the country and world. They wouldn’t last long if they weren’t.

“Deliveries and curbside pickups will remain open in the northbound direction.” From the article.

Since clearly no one here was actually involved in the planning for this let me add some context. The folks at the Ballard Alliance were instrumental in getting this done. They worked with every single business on Ballard Ave, along with the Ballard Farmers Market, SDOT, and the Mayor’s Office to find a proposal that worked for everyone. That takes a lot of work and communication and they should be congratulated for a job well done.

Fire code prevents shutting down the road completely. Given the dozens of differing opinions involved this is a great solution that improves the quality of life for both business and people along the street. Instead of criticizing it perhaps be thankful to those that helped make it happen.

Why is Seattle’s fire code so restrictive? Places all over the world close down streets for pedestrians and seem to have no issues. Even places right here in the US before and since covid.

Seems like if you suggest a modest closure of a couple blocks here the Seattle FD has an aneurysm.

Context schmontext, we don’t need no stinkin context, the experts on everything are all right here. Streets are now political. Beautiful.

Yes. Let’s sit outside all winter long. Why didn’t the Ballard Alliance think of this for say, July—October?

I wish this would become permanent. I would love to see more foot traffic in that area.