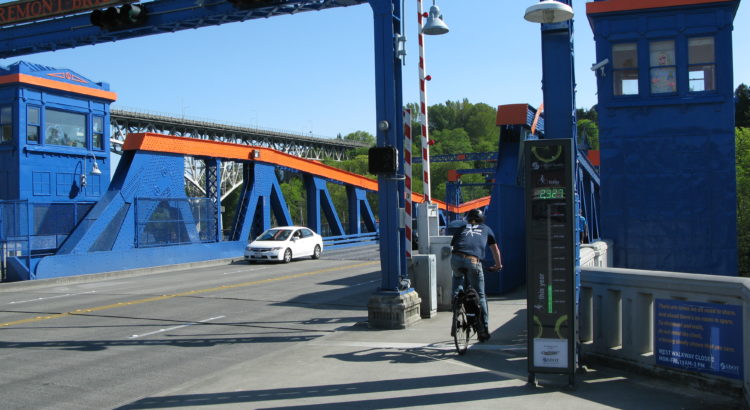 The Ballard – Fremont Greenways coalition is pushing for the city to create protected bike lanes on the Fremont Bridge.

The group has penned a letter to SDOT urging for an “emergency bike lane” to be installed on the bridge, which had over a million bike trips in 2019 alone.

“The unsafe conditions along the sidewalks of the Fremont Bridge force cyclists to decide between risking their health by riding too close to other people on the sidewalk and risking injury by riding with cars in traffic,” Ballard-Fremont Greenways wrote on Facebook. “You should not have to make that choice.”

The coalition has put together an online form to gain supporters, which points out the urgency of a protected bike lane given the high numbers of cyclists that use the bridge daily for commuting and recreation.

“As more people return to work, we can expect the numbers of people cycling to increase dramatically during commute hours, especially for those who choose to use cycling as an alternative to public transportation,” the online petition reads. “However, due to the legacy of the bridge’s original design, the narrow sidewalks—which are barely over 6’ wide at key points—are forced to act as two-way multi-use paths, creating unsafe conditions at the best of times.”

The Ballard-Fremont Greenways’ full proposal can be found here.

Or, instead of being special snowflakes, they can share (!!!) the sidewalk with peds by walking their bikes across the bridge. Takes two minutes.

seriously, much bigger issues in this city at the moment.

The special snowflakes are actually drivers in most cases. Bikes are legally allowed on any street, yet they can’t seem to handle bikes being on “their roads”. Cyclist shouldn’t, and don’t have to take the sidewalk to appease drivers who selfishly can’t obey the laws by simply slowing down and yielding.

BTW, I agree there does not need to be bike lanes on the bridge, cyclists should just ride across the deck in the vehicle lane.

The only issue with that is that the metal grating is incredibly slippery when wet, i.e., 9 months of the year. There would be a ton of crashes.

I’ve ridden over it many times in the rain, and in winter, with skinny road bike tires and haven’t had any issues, but I can understand people being concerned about that.

Agreed. I crashed on the grating one rainy night, and it turned my leg into a bloody mess!

To turn your argument back at you: cars have 4 lanes, so they should stop being snowflakes and share the 3 generous lanes they’ll still have.

No more cars on the bridge. Bicycle traffic, only.

another stupid idea from a bike rider. i am also a bike rider and cross that bridge. I suggest man up or woman up (for lizzie) and deal with it.

I ride 3-4K miles a year and fairly often cross the Fremont bridge. Give me a break. Slow down to 5-6 mph, politely say “On your left” or ring a bell, and ride on. If crossing the bridge is materially impacting your average ride speed than you aren’t very fast to begin with.

No. We don’t have the money.

But we somehow have the money for endless, useless road and highway expansions for cars. Exhibit A: Lander street bridge

What do you call a professional cyclists who just broke up with his girlfriend?

And just remember people, spandex is a privilege, not a right.

The Cascade bike club is already responsible for a lot of spending of all of our tax dollars, yet represent a tiny % of the population. As a driver, I have to license + insure myself, wear a seat-belt + make certain my headlights work. My car must conform to DOT regulations; signals, break lights, etc. Why then is it cyclists don’t have to do similar things? Why aren’t they mandated to all be similar and safe? Like autos? The city could easily mandate a simple testing policy, where a class must be passed and some sort of license plate be distributed and displayed. You know, like many others have to do. This money can then be earmarked for cyclists and their special interest projects, and more. Pay for play.

Please, I beg you, stop speaking like you are straining to repeat what you heard on talk radio a month ago.

But to the points of whoever you are parroting: spending on cycling infrastructure is dwarfed by spending on automobile infrastructure, cyclists don’t kill 40,000 Americans a year like drivers do, road wear from 200 lbs is nothing compared to 2 tons, cyclists also don’t demand massive amounts of public space to store their vehicles, and cyclists aren’t spewing massive amounts of green house gases and particulates into the atmosphere in the midst of a global catastrophe.

Various factually tenuous statements. Hyperbole. Fomenting against perceived regulatory affliction. False equivalencies. Something something something. Bicyclist QAnon scenarios. And that other thing.

Car ownership and gasoline is massively subsidized despite the massive amount of damage it causes to the environment and humans. I don’t want to hear a word about “pay for play” for bikes.

Anyone want a bike?
Come on down to the Ballard Commons and ask for Hubcap Willie. If he don’t have it, he’ll get it. Just provide a description, color and address where the bike is stored and no questions asked. Meth and heroin also available in large quantities.
Come on down!!!

I’m advocating for an emergency ban on pedestrians over the Fremont Bridge. Then the cyclists can have the whole goddamn sidewalk to themselves.

As a pedestrian who often walks across the bridge, I say: Ridiculous!! It’s only unsafe when a bicyclist ignores the SLOW DOWN sign on the sidewalk at both ends of the bridge and wants to jam across it. I can’t even count the times bicyclists have flown by me frowning.
Here’s a money saving idea: Get off your bike and walk it across the bridge.
There are WAY more important things for Seattle to spend money on.

Bicyclists are to pedestrians what cars are to bicyclists.
Pedestrians are always left out of a bicyclists conversation.

I recommend other people to read this out.
visit for more: https://bit.ly/33sVa4Z