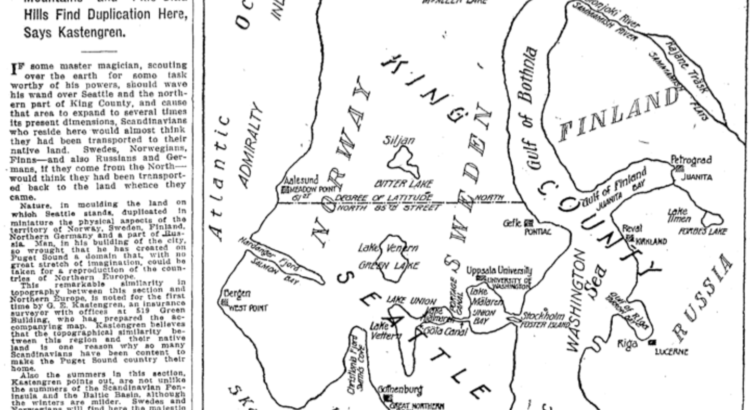 A local researcher has uncovered a map that may help explain why so many Scandinavians chose to settle in the Puget Sound region.

David Williams, a local tour guide and author, came across the below map created by G. E. Kastengren, a local insurance surveyor, and published in the Seattle Times in 1916. It shows a map of northern Europe, superimposed on a map of Seattle. As Williams shared on his website, Kastengren believed that the similarities might explain why, “so many Scandinavians have been content to make the Puget Sound country their own.”

For example, Norway and Sweden align with Ballard and points north and the U-District and points north. The Gulf of Bothnia, which separates Finland from the rest of Scandinavia, fits pretty well with the northern end of Lake Washington. To the south, Elliott Bay stands in for the straits separating Denmark from its northern neighbors. Kastengren even points out how the University of Washington matches Uppsala University and how Sweden’s largest port, Gothenberg corresponds with downtown Seattle’s big port facility for the Northern Pacific RR. You can also see how the old city boundary of 85th Street runs along what would be the north 61st degree of latitude.

The map has been circulating on Twitter the last few days, with some interesting observations: one person pointed out that Finn Hill just north of Kirkland matches up with where Finland lies on the superimposed map.

Thanks David, for sharing your findings!