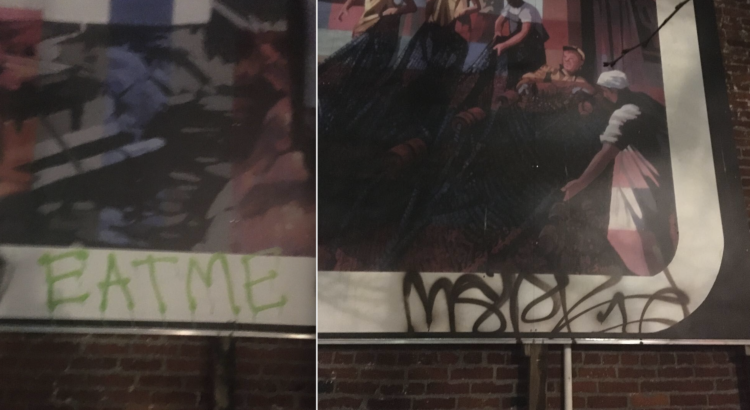 Vandals have yet again targeted the mural at Bergen Place Park.

The taggers left their marks all along the bottom edge of the bottom of the 52-foot-long mural—”the worst ever,” Friends of Bergen Place volunteer Victoria Sangrey Hunter tells My Ballard. She discovered the tags on Friday night, and spent the weekend scrubbing the mural clean with a few others.

“It took four of us to remove the graffiti yesterday, scrubbing and wiping it away,” she says. By our count, this is the fourth mural tagging in 10 years.

“It is incredibly sad that once again we have individuals who feel it is ok to damage a piece of community art,” Sangrey Hunter says. Friends of Bergen Place has been caretaking the mural since it was created in 1995. The organization raised $100,000 to update the mural in 2015—King Harald V of Norway visited Ballard for the rededication.

“We want the taggers to know we have filed a police report, contacted the Seattle City Find it, Fix it program, contacted Mike Stewart at Ballard Alliance and business owners and we will be watching for any increased activity at Bergen Place,” Sangrey Hunter says.  “I truly hope this never happens again.”