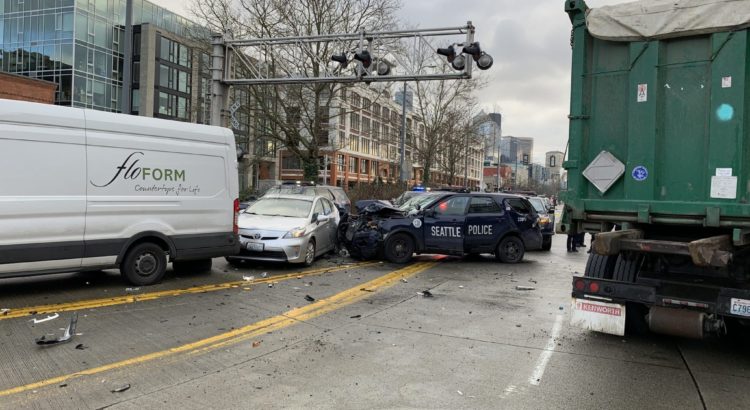 Police have arrested a 45-year-old man after he carjacked a motorist at gunpoint in Ballard and then led officers on a pursuit that ended in a crash in downtown Seattle.

According to SPD, the carjacking victim called 911 at 7:45 am on Wednesday morning saying he’d been carjacked at gunpoint in the 300 block of NW 85th St. The suspect reportedly pointed a shotgun at the victim, demanding the keys to the victim’s truck.

Police spotted the truck driving away and began pursuing the suspect, who drove out of Ballard toward downtown Seattle. Officers followed him to Pioneer Square, where he turned onto Alaskan Way headed north. SPD says officers attempted a Pursuit Intervention Technique (PIT maneuver) as the truck approached Broad Street.

The maneuver caused the suspect to lose control of the truck, which he then crashed into other vehicles. The suspect then fled on foot, and was quickly caught by officers a short distance away.

SPD says four people were evaluated for injuries at the scene, but none required further treatment.

The suspect is in custody and will be booked into King County Jail following detectives’ interviews.