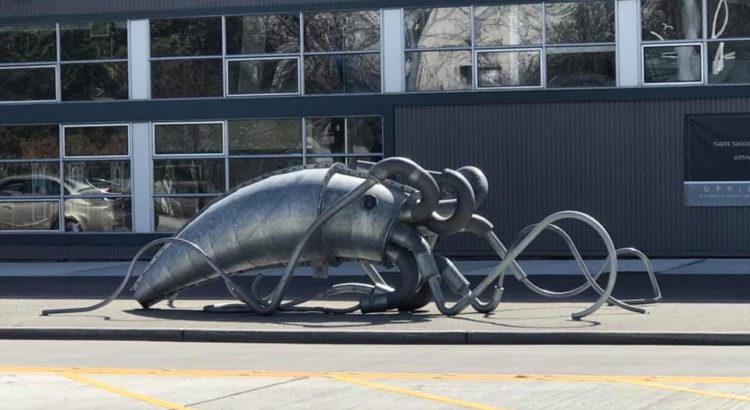 Ballard has a new bike parking structure, and it’s in the shape of a giant squid.

Known as the “Parking Squid,” the 18-foot-long, 7-foot tall, 5-foot-long galvanized steel sculpture was recently installed on the west end of NW Market Street in front of Portage Bay Café (near the corner of NW Market St and NW Locks Place).

The famous Parking Squid has a long history: It was commissioned by the Seattle Department of Transportation (SDOT) in 2009 and funded by the 1% for Art program administered by the Office of Arts and Cultural Affairs. The squid was designed by local artist Susan Robb.

Decorative Metal Arts in SODO fabricated the big squid, which has had a few homes over the years. After a time at the Seattle Center, it was moved to the waterfront near the Seattle Aquarium.

The squid has moved to Ballard to make way for construction related to the new waterfront park, Ethan Bergerson from SDOT tells My Ballard. It’s unclear how long the squid will be in Ballard, but given typical construction timelines, it’s likely Ballard will get to enjoy it for some time to come.

Artist Susan Robb has a diverse background in art and design. Her work centers around and articulates the relationship between landscape and object through investigations of environment, materials, and contemporary social issues, according to the Seattle Art Beat Blog.

“Parking Squid’s raised bike-wheel clutching tentacle beckons cyclists to lock their bikes to her while also creating a new iconic locus for meeting and interaction,” Robb says about the Parking Squid on her website.

In recent years, Robb’s work has included Urban Arbotecture, which according to her website is “a walking tour through downtown Seattle which uses trees as a jumping-off point to discuss the city’s history, progress, urban planning developments, social justice, and public art.”

Robb’s work encompasses all senses: In 2010, she collected custom-distilled and aromatic compounds from King County’s hiking trails to create “Scent of the Trail,” a trail-specific set of nature-filled fragrances.

The tentacles of the squid serve as bike racks and overall also provide an artistic view for the public. It was originally created for The Next Fifty the 50th anniversary of the 1962 World’s Fair. and was presented by the Office of Arts & Cultural Affairs. It was part of a series of six public artworks that illustrated how artists view their conversation on environmental sustainability.