The wait is over: Ballard Locks to reopen to pedestrians April 28 – My Ballard Skip to main content 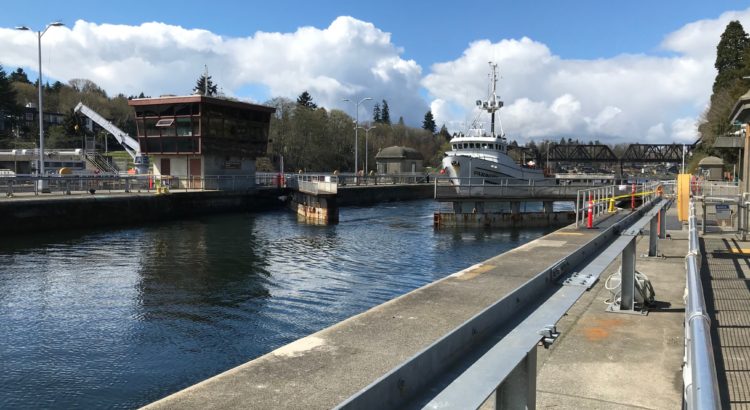 It’s been over a year since the Hiram M. Chittenden Locks pedestrian bridges closed to the public, but soon, that closure will lift.

The entire Ballard Locks area closed to pedestrians at the start of the pandemic last year, however maritime traffic has been unaffected by the COVID-19 closures. In October, the U.S. Army Corps reopened the botanical gardens, but limited pedestrian access to the park grounds.

In a press release, the U.S. Army Corps officials say the decision to reopen the visitor center and pedestrian bridges was made based on COVID-19 community data and safety considerations.

“Officials wish to make clear that if the COVID-19 situation in the community gets worse, the restrictions could go back into place for the safety of Locks employees and to ensure no disruptions to lock operations,” the release states.

“We are happy to welcome our commuters back to the locks,” project manager Jon Hofstra said in a statement. “We understand that it has been inconvenient for our neighbors to find alternative routes and we thank everyone for their patience and understanding during this unprecedented time.”

The U.S. Army Corps says the fish ladder viewing area will remain closed until further notice, however, due to an upcoming maintenance project.

Last fall, the Army Corps had to perform some repairs to the fish ladder, which sustained some damages during the historic flooding in February 2020 in which the Ballard Locks dam had the highest water flow ever measured since recordings began in 1946.

The floods caused some of the native concrete foundations to become exposed, which compromised the structural integrity of the entire fish ladder.

The Ballard Locks staff ask that commuters travel straight through the locks and continue to practice social distancing while crossing. They ask that visitors refrain from stopping and congregating to ensure continued safety for other visitors and the Locks staff.

The historical administration building will remain closed until further notice.

The gates will be open from 7am to 9pm beginning April 28. As a reminder, masks are required on all federal property indoors and outdoors.