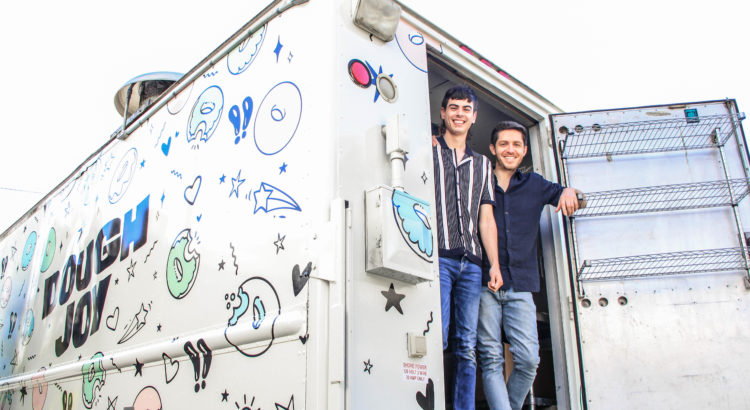 Here’s a little sparkle for your Monday morning: There’s a new queer-owned plant-based donut truck rolling into Ballard next month.

Dough Joy is the creation of Christopher Ballard and Sean Willis, Seattle-based vegan-trepreneuers. Willis and Ballard created the Outbound Herbivore brand and self-published magazine of the same name—Seattle’s only vegan magazine.

“When we started Outbound Herbivore in 2019, we set out with the goal of helping to further grow the vegan community by supporting and promoting local vegan restaurants and vegan companies here in Seattle, but also through events like our vegan mini markets and secret dinner parties,” Willis told My Ballard.

“Since COVID slowed down that aspect of what we were planning to do, we revisited our mission of how we can make a positive impact in our community, which ultimately led to Doughjoy, Seattle’s only 100% plant-based yeast-raised donut truck.”

The idea for Dough Joy came out of a conversation Willis had with Cycle Dogs owner Keaton Tucker, who told Willis he planned to sell the Cycle Dogs food truck in preparation for their move into the former No Bones Beach Club location.

“After COVID and seeing the impact it had on brick-and-mortar restaurants, we figured that for our first venture in food, a food truck made the most sense financially and it seemed like an opportunity we just couldn’t pass up,” Willis said. “We decided that delicious, creative, yeast-raised vegan donuts is what we wanted to bring to Seattle and Doughjoy was born.”

Willis and Ballard had “zero baking experience” when they hatched the idea, and spent months testing recipes, trying out different ingredients, and running taste-tests with friends and neighbors. After extensive experimenting, “we ended on a fluffy, melt-in-your-mouth doughnut that we are super proud of.”

Some of their favorites that you can expect to find: The Basic B, a veganized version of a classic glazed donut; Petal To The Metal, a rose donut with pink marbled icing; The Faconator, a maple-icing topped donut with crispy smoky coconut bacon; and finally, the Cereal Killer, created from actual cereal milk and topped with fruit hoops.

Their donuts aren’t gluten-free, but Willis says that’s on their radar for future creations.

They’ll have a limited supply of donuts in the truck, and Willis says they’re focused on quality over quantity, so get to the truck early for your best shot at scoring one. Dough Joy will also serve coffee for morning runs.

When Dough Joy opens in May, they’ll be parked across from the new Cycle Dogs location at 5401 17th Ave NW. Once they open, they’ll offer online ordering to lock in donut orders for next-day pickup; you can sign up for their newsletter by visiting their website.