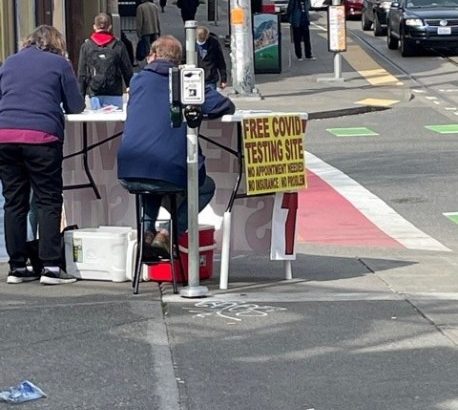 Public health officials are warning the public to avoid pop-up COVID-19 testing sites, which they say are “unusual” and likely fraudulent.

Seattle and King County Public Health say there have been a number of COVID testing operations popping up lately, often in the form of walk-up testing tables. One of these tables was recently spotted in Ballard on NW Market St.

“Everyone should be aware that these testing operations found in Seattle and Auburn are not supported or endorsed by Public Health – Seattle & King County or the Washington State Department of Health (DOH). Neither health department goes door-to-door to solicit testing without an appointment with people who live there,” Public Health says in an alert.

Public Health says the Seattle locations are part of the same business, Community Wellness America (CWA). CWA sends their tests to a California-based lab, but so far, no positive results have been sent to either Public Health or Washington State Department of Health after operating for several weeks in Seattle. Public Health says that raises concerns that CWA isn’t properly processing test specimens.

Officials say if you have received a test from one of these operations, the results may not be accurate, and it’s a good idea to get retested at a reputable site (you can find a list of official testing sites on the Public Health website).

“COVID-19 testing remains essential, and people who have symptoms or who have been exposed should get tested promptly. This is important to both identify illness early so that people can get the care that they need and to prevent spread to family, friends, and others,” Dr. Jeff Duchin, Health Officer for Public Health – Seattle & King County said in the alert. “We have many free testing options in King County that provide reliable results. People need to be aware of unusual testing offers that may not be trustworthy.”

While Public Health has communicated their concerns with CWA, the department does not have regulatory authority over these types of testing operations. The department says they have made formal complaints to the Washington Department of Health and the Consumer Division of the Washington State Attorney General’s Office, “who are looking into whether they have jurisdiction over the matter.”