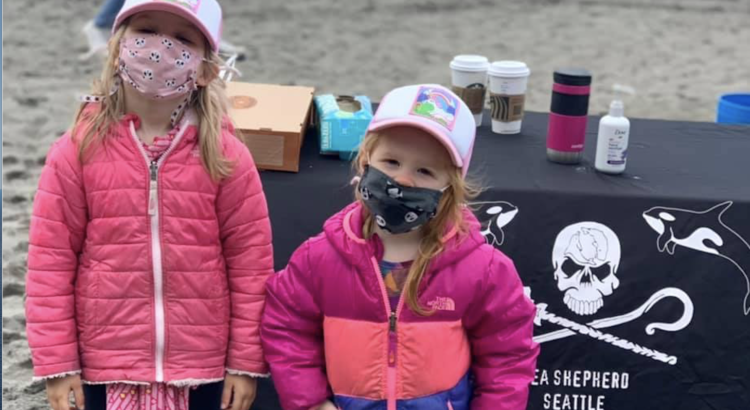 Volunteers with Sea Shepherd Seattle combed Golden Gardens on Sunday, collecting about 400 pounds of trash from the beach and park.

Chris Joyce, Field Operations Coordinator with Sea Shepherd Seattle says they had a great turnout at the cleanup event, with about 40-50 people pitching in.

“I was walking around collecting and overheard a mother tell her two daughters, ‘Look at all these people picking up trash today, see how important it is to keep the beach clean?'” Joyce tells My Ballard.

Joyce says they collected a large amount of glass bottles and bulky items, including a large blanket and some fishing gear. He says he was glad to recover buoys and rigging, which he says are notorious for causing whale entanglements.

They collected very few plastic straws or coffee cups, “and only one needle and syringe,” Joyce says.

After each cleanup, Joyce does a final count of items recovered to report the data to NOAA’s Marine Debris program. The trash audit includes sifting through taking photos of each trash group collection—glass, plastic, cups, etc.

What concerned Joyce was how many fireworks and cigarette butts they found. “Both items contain highly toxic PCB’s which are quickly ingested by phytoplankton and then absorbed through the food chain all the way into the stomachs of whales.”

Joyce says both seabirds and shorebirds are declining at a rapid rate, and many are found with cigarette butts in their stomachs. “Cigarette butts are highly toxic. If you must smoke, we absolutely implore smokers to consider e-cigarettes, which are reusable and aren’t as toxic,” Joyce urges.

The latest pollutants to “enter the scene” are face masks.

“Most of the trash collected was beach pollution caused by beach users, as opposed to tidal trash,” Joyce says. “What’s concerning is any of the summer storms we expect to have can easily produce high winds and high waves which will wipe out all the beach trash into the waters of the Puget Sound, and into the mouths of marine life.”

The Seattle chapter of Sea Shepherd runs beach and park cleanups on a regular basis—follow them on Facebook for the latest upcoming events and news.

“Many thanks to the City staff of Golden Gardens in helping arrange disposal of the trash, and even greater heartfelt thanks to all who came out to protect and defend the beaches and marine life habitats of the Puget Sound,” Joyce says.