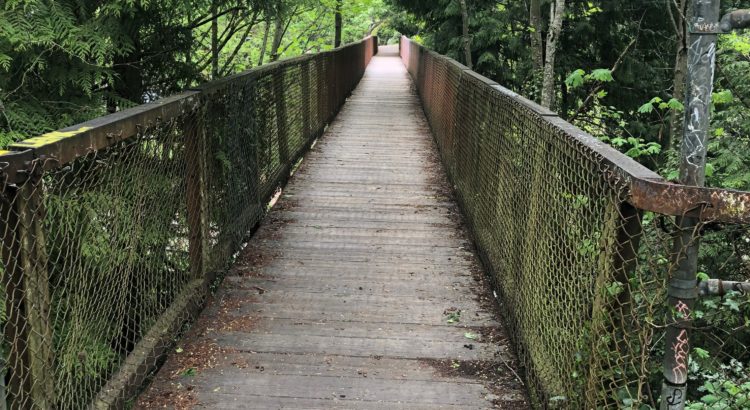 The pedestrian and bicycle bridge that connects 33rd Ave W to the Ballard Locks in Magnolia is nearing the end of its life span, and the Seattle Department of Transportation (SDOT) is asking for public feedback on how to either rehabilitate or replace the bridge.

There are three primary design options on the table, and SDOT has created a public survey to gauge local opinion on the proposed changes. The survey is live now and will close on June 8.

Currently, SDOT is evaluating the feasibility and various options, and public feedback is part of the design process. Survey results will be a major factor that the project team will consider when deciding on which alternative will move forward in the next phase of the project.

Here are the three options on the table:

The rehabilitative option would mean SDOT would keep the existing superstructure but would widen the bridge from six feet to 10 feet. SDOT would install new steel girders and aluminum decking/railing while repairing the existing timber support frame and building a new south abutment. This is an attractive option for SDOT, as it would be the lowest up-front cost. However, it would not be ADA compliant.

And a profile view:

This design option would entail a complete replacement of the current bridge. SDOT would install a new prefabricated bridge with new north and south abutments. The bridge would be much wider; rather than six feet like the current bridge, it would be 14-feet-long.

SDOT says it would be built with the same alignment and slope as the existing bridge and would be more expensive up-front, but with lower long-term costs. This design is also not ADA compliant, but the wider bridge would allow for better access overall.

And the profile view:

And here’s an example of a truss pedestrian bridge similar to the proposed design:

In the final design option, SDOT would remove and replace the existing bridge and install a new superstructure and deck. The design includes new north and south abutments and a new retaining wall on the south approach. This bridge design would also 14 feet wide.

This design would allow for the bridge to be within the city right-of-way and would be vertically ADA compliant. SDOT says there would be higher up-front costs but lower costs over the long run.

And here’s an example of a concrete pedestrian bridge similar to the proposed design:

To learn more about the design options, visit this website. The project is so far only funded up to 90% design through the Levy to Move Seattle. After the 90% design milestone expected at the end of 2021, SDOT will submit the project to the Roadway Structures Department, who will decide if it will move into construction.