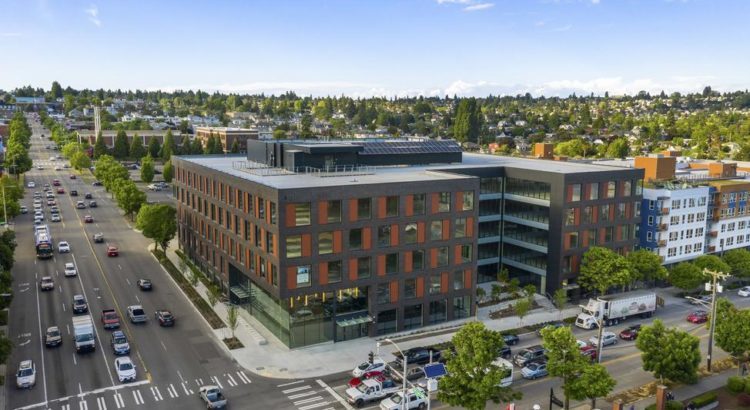 The WeWork location in Ballard is shutting down as part of a major restructuring due to pandemic-related financial setbacks.

As GeekWire reports, WeWork sent an email out to its Ballard tenants announcing that the location in the new building on 15th Ave NW and NW Market St would close down on June 16. The tenants are being given the option to move to another WeWork location; there are 10 other locations in the area, with seven in the downtown area and three in Bellevue.

The WeWork in Ballard opened in December 2019; just months before the pandemic started. The coworking space fills two floors of the recently built corner development on 15th and Market, sharing the building with Target and Polyclinic. The location was designed to reflect Ballard’s maritime and Scandinavian roots; the coffee bar is lined with buoys, and neon light fixtures in the lounge were inspired by maritime flag shapes and patterns.

Back in 2019, the company had plans to expand to open several new locations around the city to bring the number of its regional locations to 22. However, the pandemic halted many of those projects, with Ballard’s location the most recent addition to WeWork’s Puget Sound footprint.

In the email to tenants, NW area director of WeWork Robin Cardoso said the company is conducting an “in-depth review of their global real estate portfolio in order to optimize our assets and operations around the world.”

The company currently has over 700 locations in 38 countries. In recent weeks and months, the WeWork has closed offices in cities around the country including New York City, Boston, Denver, and Sacramento.

Despite their losses, WeWork could see a revival in coworking spaces: As many companies are opting to do away with permanent office rentals, temporary and flexible subleasing is an attractive alternative. In the meantime, the company’s pre-pandemic growth has come to a complete halt as it reassesses plans for the future.

No word yet on what will become of the two floors where WeWork was operating, but we’ll update when we learn more. According to Martin Selig Real Estate, there are still vacant spaces within the 5-story, 200,000 square foot building; both the second and third floors still have vacancies, almost two years since the building opened.