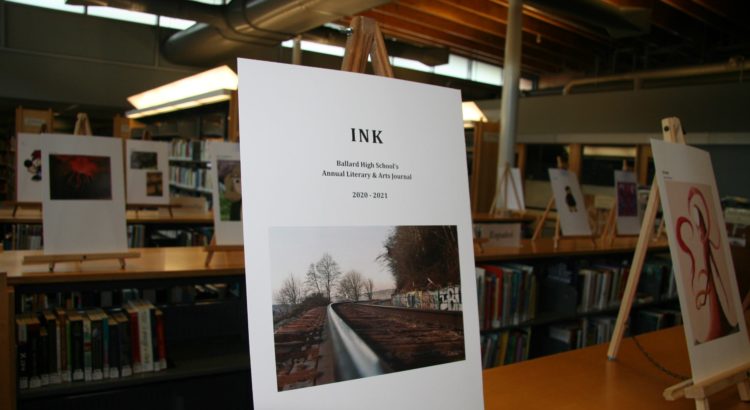 Members of Ballard High School’s Ink Club, an arts and literature club, published the 2021 edition of their annual Ink Journal last month, which consists of student art and writing. All works from the journal are on display at the Ballard Branch Library and in the windows of five local businesses through June 28.

Ink Club has been meeting virtually every Thursday since the start of the school year, led by co-presidents Iris Worrall and Aiden Wilkson and with the help of staff advisor Gordon Macdougall.

The year started off with a few challenges, particularly when it came to recruiting new members.

“We were actually a little bit worried towards the beginning, because every member was a senior, which was a little bit concerning, so we didn’t want the club to die out,” Wilkson said.

“Usually, you know, advertisements for joining clubs are on posters in the hallways, which did not exist [this year],” Worrall said.

Despite these initial setbacks, the club was able to find new members who were eager to find some semblance of community during what was an isolating time for many.

“I think just having the extra effort of people having to go look and find a club this year made it so that everyone who came to Ink Club really wanted to be there and it just made for some really cool people,” Wilkson said. “It felt a lot more connected.”

Worrall in particular found their weekly meetings to be a rare opportunity to connect with fellow students.

“It was the main social thing I had this year with other people—it was nice. Another hour spent sitting in front of the laptop on a camera, but I was actually talking to people, and seeing people,” she said.

Ink Club meetings are mostly informal according to Wilkson and Worrall. Come April, however, they kick into gear and start putting together the Ink Journal.

“The main issue that we kept running into was getting stuff to put in the journal,” Wilkson said. “We ended up with a pretty fair amount of work, but that was kind of the hard part.

“Usually, we do get a lot of people emailing their works, but… in the past, we’ve gotten physical works that we then had to take a photo of or scan or type,” Worrall said. “So at least that part was easier, because it was all digital for us.”

In previous years, Ink Club has partnered up with the Ballard Branch Library to put on Spilled Ink, a showcase of student art and music performances. This year, there are still art and written works on display at the library, as well as in the windows of Push/Pull, Fleet Feet, Ballard Sheet Metal Works, Market Street Shoes and Fair Trade Winds.

For more information about copies of the Ink Journal, contact Gordon Macdougall gimacdougall@seattleschools.org.