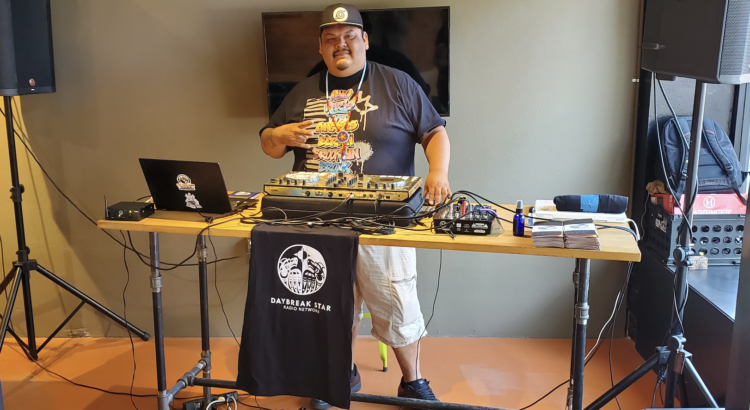 Executive Director Michael Tulee was the visionary behind the station; he wanted to reach Native communities in a new way.

“A great way to reach people is through music, so he wanted to build a Native American radio station here at our offices at United Indians of All Tribes Foundation in Discovery Park,” Program Director Harris Francis tells My Ballard.

Tulee and Francis worked together to get the station off the ground; Francis has been a DJ for over two decades in Seattle, and helped build out the programming for Daybreak.

Daybreak launched on July 10, with a grand opening party at the station’s headquarters at Daybreak Star Cultural Center.

Francis tells My Ballard that Daybreak is airing a wide range of Native American, First Nations, and indigenous music.

“95 percent of the music being played is produced, created, or written by Native peoples,” Francis says. Show genres range from rock, folk, country, hip hop and rap, EDM, traditional, flute, drums and pow wow, and metal. “Our main emphasis is highlighting and showcasing the wide range of Native American music,” he said.

“Soon, we will also have a number of special programming shows which will include storytelling, news worthy topics and conversations, interviews with artists and musicians, live DJ’s in the studio, and eventually live broadcasts on location from relationships that we have throughout the community,” Francis explained.

The radio station won’t be on the dial; you can tune in by visiting Daybreak Star Radio’s website and listening to the live stream. Francis says the decision to be an internet-based station was to reach more people.

“Radio is all digital now,” he said. He wanted it to be available to audiences across the country, and going digital was the best way to do so. They’re also working on developing two exclusive apps for the radio station for Android and iOS, which he says will be coming out in August.

Here’s a list of some of the DJs who are on the schedule:

Francis says they’ll be adding more hosts and DJs as they grow and develop, “according to the desires of our community.” They’re also looking for interns, sponsors, advertisers, and people to help with the internal processes; here’s a list of contact details for people interested in getting involved.

They’re also planning to do events in the future—keep updated on their plans by connecting with Daybreak Star Radio on Instagram.