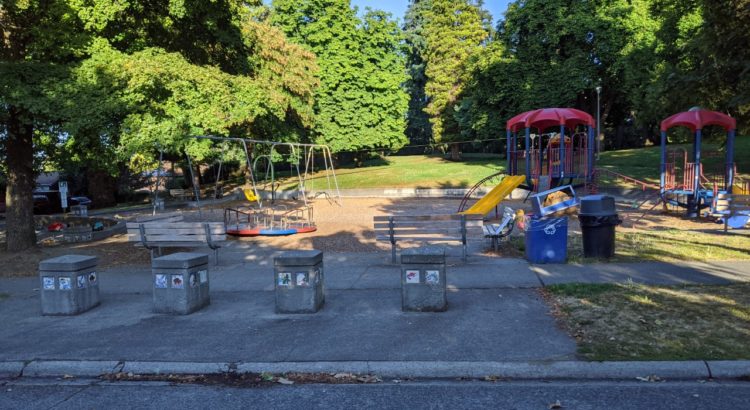 The City is in the final design phase for the Salmon Bay Park (2001 NW Canoe Pl) play area renovation, and they’re asking for public input on the play area equipment options.

Seattle Parks and Recreation is considering three different options for the play area, and has created an online survey to get feedback on the designs. The survey will remain open until Aug. 8.

“We want to know your thoughts about the preferred conceptual design, which play equipment proposal you like best, and would appreciate your help prioritizing elements from the equipment proposals if you like more than one,” the survey reads. “We will use this information to create construction documents to improve the play area.”

The Woodland Explorer has a wide range of play elements including swings, a standalone net climber, and a circuit of play that connects the north and south ends of the play area. The play structure also has an accessible bridge that connects to the paved walkway at the north end of the play area, plus a side-by-side slide which was a design feature that previous survey respondents highlighted as desirable.

The second proposal, the Forest Lookout, is more minimalist in its design with a large tower structure and standalone swing set with several separate swings. Between the swingset and the play structures is a whirl and a series of balancing logs and stumps to help break up the play spaces.

The final option is the Treetop Trail, which includes an integrated treehouse with a net climber. This design also includes a bridge into the smaller structure for wheelchair access. The larger structure has a larger swooping slide and a smaller side-by-side slide, plus standalone spinning seats.

The newly replaced zipline will be retained regardless of the chosen playground design and will include access improvements and new site furnishings. Seattle Parks says all renovated elements will meet current safety and accessibility standards.

The design options came from the first survey Seattle Parks conducted earlier this year. They found that over three-quarters of respondents said they preferred a nature-inspired design over modern, colorful, or imaginative play. The Parks department also found that most respondents were interested in improving safety for younger users, and wanted to see included a sandbox, whirl feature, slides, and swings.

In their second survey to determine equipment play types, Seattle Parks learned that most respondents wanted play equipment over secondary amenities such as games or fitness equipment. Most also preferred a treehouse theme and some kind of net climber for older kids.

For more on each current design option, you can watch the video below.

The feedback from the survey will help Seattle Parks select the preferred equipment options and finalize their site concept plan. The design phase is scheduled to end in December, with construction expected between January and October 2022.