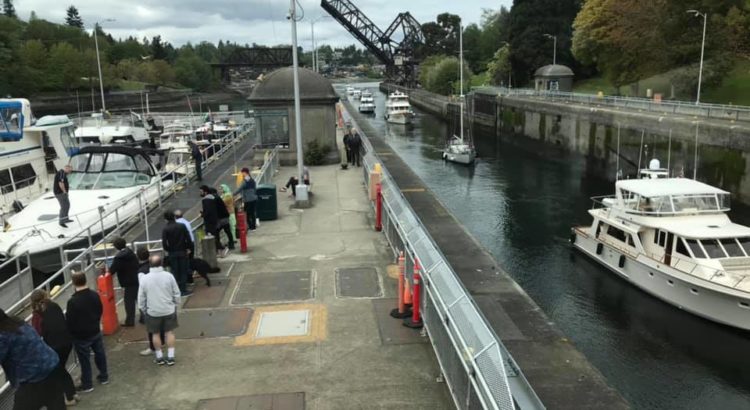 Lake Washington’s water level may drop below an elevation of 20 feet this month, and local officials are taking steps to conserve water by improving the Ballard Locks efficiency.

The U.S. Army Corps of Engineers says that current projections suggest the lake water level could drop as low as 19.75 feet if conditions remain dry for a prolonged period.

“If we don’t receive typical September rainfall, Lake Washington could drop below normal,” Seattle District Senior Water Manager Sonja Michelsen said in a press release. “There is currently only a 30 percent likelihood of this happening, and, even then, we expect a drop of less than 0.1 foot below normal. However, the worst-case dry weather condition could draw the lake down to an elevation of 19.75 feet.”

The Army Corps typically maintains the water level between 20 and 22 feet, which they measure at the Ballard Locks. Winter water levels are kept at 20 feet, and they begin the annual summer refill each year in February, which brings the lake to a 22-foot elevation by late May or early June.

The 22-foot level is best for summer water use, helping fish safely pass through the waterways, easing navigation, and controlling salinity. The Army Corps says that water is slowly consumed throughout the summer and usually reaches typical winter level in early December. However, this year was so dry that the water levels are much lower than typical for this time of year.

To help improve lock efficiency and preserve water in the Ship Canal and lakes, the Army Corps will increase the number of recreational vessels in each locking and prioritize the use of the small locks.

The Army Corps is also recommending that floating homeowners and others with floating structures and vessels moored on Lakes Washington and Union and along the Ship Canal prepare for possible lower water levels.