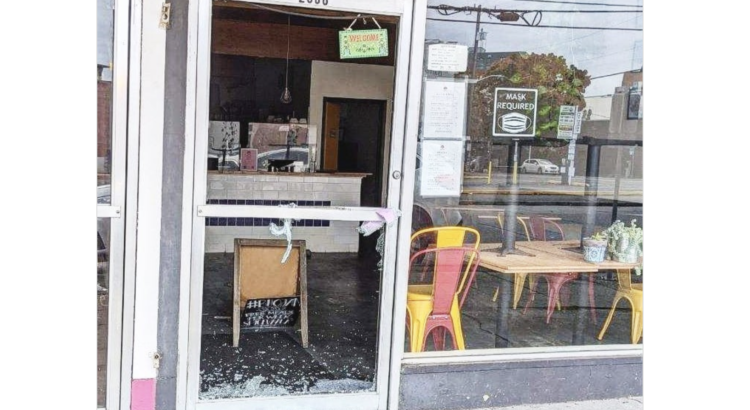 Update: SPD says that they have some leads related to one of the break-ins, which the Investigations Unit will follow up. They haven’t yet recorded any losses from any of the businesses besides damages to the windows, but say it usually takes time for businesses to identify stolen items and report them.

Original: Several more local businesses were the targets of thieves in recent days: Katsu Burger, Ballard Coffee Works, Spice Waala, and Wild at Heart have all had break-ins in the last few days.

Yesterday, we reported a break-in at A la Mode Pies in which thieves made off with cash and a pie from the shop. A la Mode’s next-door neighbor Katsu Burger had a break-in on the same night, forcing them to close on Sunday to clean up the mess.

Ballard Coffee Works was also hit by thieves and closed for a day while they assessed the damage.

Just down the street from A la Mode and Katsu, Spice Waala also had a break-in on Sunday night. Uttam Mukherjee from Spice Waala told My Ballard that thieves broke the glass front door and stole about $1,000 worth of electronics and cash from the restaurant. They spent Monday cleaning up and were able to reopen on Tuesday.

Thieves also broke into Wild at Heart a few nights ago, with an estimated loss of $1,600.

We’ve reached out to SPD for more information about the crimes and will update you if we learn anything new.