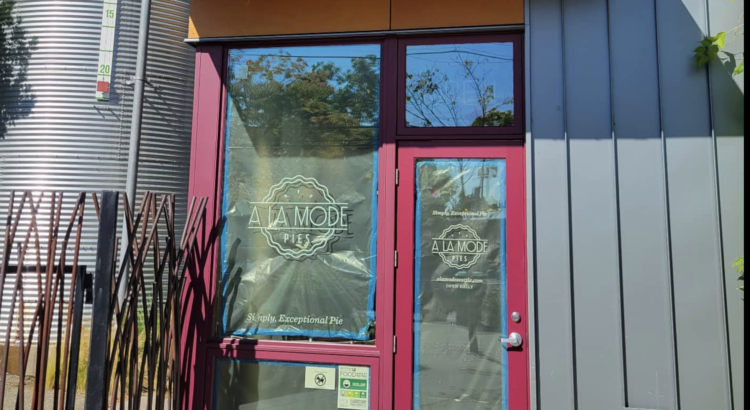 Two different thieves broke into the newly opened A la Mode Pies in Ballard over the weekend, stealing cash and a whole pie from the shop.

A la Mode recently took over the former Parfait location in Ballard, just next to the Ballard Library. They’d only been open a few weeks before the break-in.

Owner Chris Porter told My Ballard that the burglary happened at 1 a.m. Sunday morning. According to their cameras, a man used a rock to smash the front door and then stole the tip jar. An hour later, Porter said another man entered the shop and stole the cash register and a whole pie. “At least he’s a fan of A la Mode Pies,” Porter said.

Porter said they have video of both break-ins and are working with police. The damage was minimal, but he’s covered the front door with wood for the time being.

“It’s disappointing as we just opened the Ballard location a few weeks ago—it’s not the welcome mat we were hoping for but things happen.”

If you want to support A la Mode, Porter said to check out their Thanksgiving pre-order menu. “This holiday, Ballard should leave the baking to us,” Porter said.