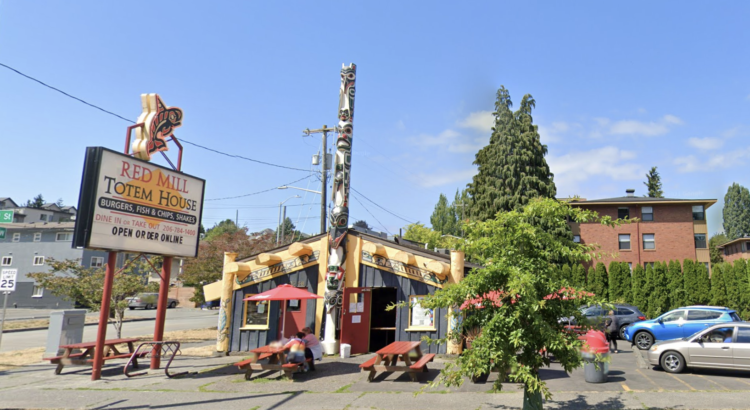 The totem poles at the historic Totem House restaurant have been salvaged as it transforms into a new Pagliacci Pizza.

The Red Mill Totem House closed in September, and Pagliacci Pizza announced they’d be taking over the location with extensive remodels. The Totem House will take on a brand new form, but certain elements will remain.

Pagliacci Pizza owner Matt Galvin tells My Ballard that they plan to save the two smaller Jimmy John carvings and that they will be “prominently featured” on the outside of the new building. They’re also saving the neon salmon sign, which was previously displayed at the top of the pole sign.

Galvin says the property owner is working with MOHAI to relocate the larger exterior pole, which according to local experts, is a traditional Haida carving.

Bill Holm, curator emeritus of Northwest Coast art, said in a Burke Museum article from 2015 that the central pole is very similar to a model pole created by Zacherias Nicholas that’s held in a private collection, “which was possibly for sale in the shop at the time the frontal pole was carved.”

My Ballard has reached out to MOHAI to find out what’s in store for the relocated pole; we’ll update with any new information.