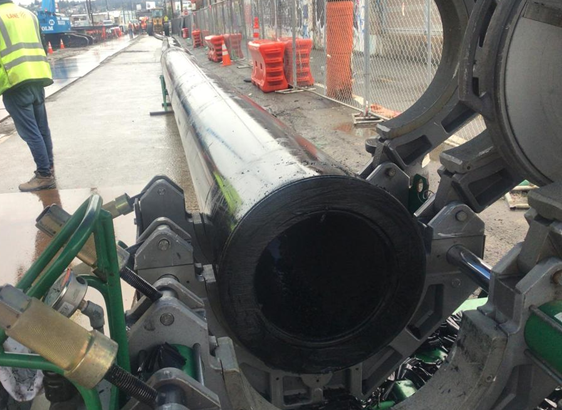 SPU says that crews will be installing the pipes through the end of the year either above ground or in shallow trenches near the project sites. Crews plan to be working underground around existing water pipes; the temporary pipes will allow them to do the work without shutting off water service to nearby residents and businesses.

You can watch a short video of the process of pipe welding on SPU’s YouTube channel.

During the pipe bypass work, SPU says you can expect the following:

SPU says you can expect the following:

Meanwhile in the downtown Ballard site, the tunnel boring machine MudHoney has reached its planned pause to switch from a conveyor belt system of removing spoils to a rail system.

During the pause in tunneling, SPU says you can expect heavy equipment such as cranes being installed on site along with truck deliveries of MudHoney equipment and noise and vibrations typical of a construction site.