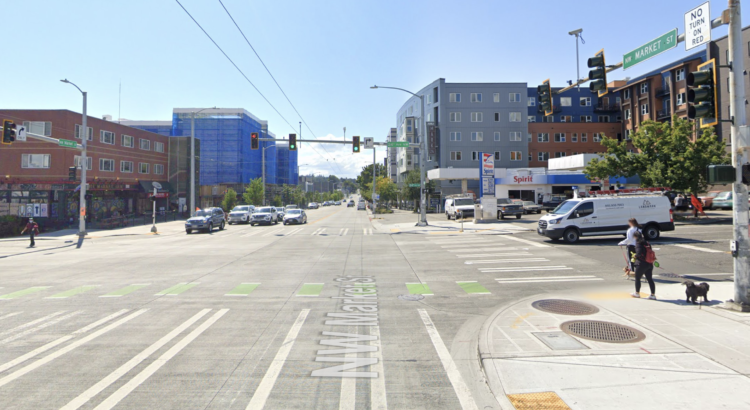 A Ballard resident was injured and his dog killed when they were struck by a vehicle while crossing in a crosswalk at 24th Ave NW and NW Market St over the weekend.

The victim was out on a walk with his six-year-old rescue dog Zelda on Sunday night—his 40th birthday—when a driver struck both the man his dog and then fled the scene. Witnesses rushed to help the man and Zelda to provide assistance and call the fire department and police.

The victim sustained a head injury and lost consciousness briefly, and Zelda died at the scene. He was transported to Harborview for treatment and has since been released.

Local first responder Sergio Garcia teamed up with the victim’s sister Shelby Williams to set up a GoFundMe account to raise money for the victim’s medial bills and for cremation of Zelda. As of Wednesday morning, it has collected $10,015 from 206 donors.

“I think it would be a nice gesture to show this man that there are others out there who genuinely care about our neighborhood, and the people in it,” Garcia wrote in the fundraising campaign.

Williams says her brother was in the emergency room and received stitches and CT scans, and has missed work due to his head injury.

“He is doing alright, now that he is home but extremely sad over the loss of Zelda,” Williams shared in the My Ballard Group. “She was such a good dog, and he is the best dog dad she could ask for. He lost his family member.”

If anyone has any leads on who was driving the vehicle that struck the man and his dog, contact us at tips@myballard.com and we’ll help connect you with the right people.