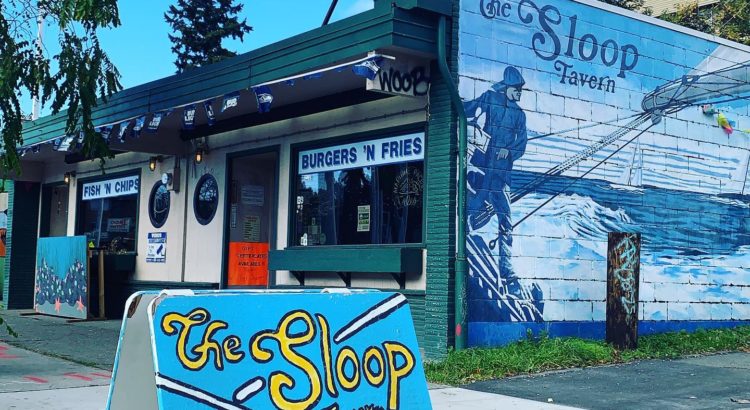 One of Ballard’s oldest watering holes is turning 69 this summer: The Sloop Tavern will be celebrating its anniversary this Saturday.

The 69th anniversary comes on the heels of some great news for the Sloop, which was facing an uncertain future earlier this year. The previous owner sold the Sloop back in April for $2.5 million. Fortunately, the new owner has decided to extend the tavern’s lease for at least another five years.

The history of the tavern is a colorful tale; owner Patrick Files says that legend has it that Ole Olsen brought it with him from England after the Great War. He says there’s a picture in the bar of the “Sloop Inn”—the original Sloop—somewhere in England.

Pre-1970, Files says it was only half of its current size; the other side was a machine shop. In 1976, Wayne “Big Wayne” Schmidt bought the tavern, and then started the Sloop Tavern Yacht Club (STYC), “so he and his sailing buddies had a clubhouse and a place to drink,” Files says. The club is still active, hosting races every Monday night.

Phil and Connie Chase bought the Sloop in the early 80s and passed it on to their son Joe in 1995. Files’ dad, Charley, bought it from Joe in 1999.

Charley was partners with the Mitchell Bros restaurateurs (owners of Charlie’s, Windjammer, Golden Tides and Spinnakers). In 2011 Charley passed away and Patrick took over. “I’ve tried to keep the Sloop as a time capsule of its heydays,” he told My Ballard in a previous interview.

The bar will be turning 69 with much fanfare; they’ll start celebrating at noon on Saturday, June 25 with food specials, limited-edition merchandise, and raffle prices.