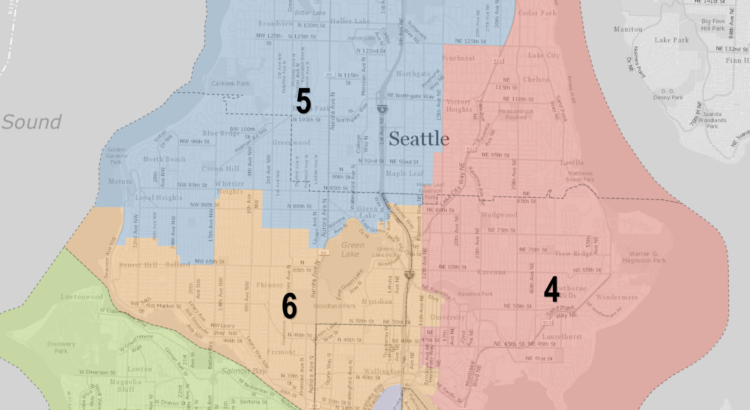 Update 8/5: The redistricting commission has created a single draft map of the proposed new district boundaries, as shown below. There is also an interactive version, available here.

The public is invited to comment through Nov. 8, 2022 either in person at one of three upcoming public forums, or in writing using the Seattle Redistricting Commission’s public comment submission form.

The public forums are as follows:

Original: The City of Seattle will be adjusting the boundary lines of seven city council districts and are asking the public to weigh in on the proposals.

The redistricting is to “ensure that each district has the same amount of people so they can be equally represented,” the City says.

The Seattle Redistricting Commission has created four example maps for the public to review and comment on via an online survey.

You can review the proposed maps below (the dotted lines indicated current district boundaries).

Map 1 would expand District 6’s northern boundary into parts of the current District 5, but its eastern boundary would be reduced to exclude the Meridian neighborhood next to Green Lake.

Map 3 retains much of the current district lines, but would exclude all of Greenwood to the north. On the east side of the district, the new boundary would extend to Stone Way N.

Map 4 would also extend the eastern boundary to Stone Way N, but would exclude Blue Ridge, north of Holman Road. Most of Greenwood would also be excluded.

The Seattle Redistricting Commission will be holding a meeting online on Aug. 9 from 12-2 p.m.; the public is invited to join via Zoom (verbal and written comments will be accepted during the meeting).