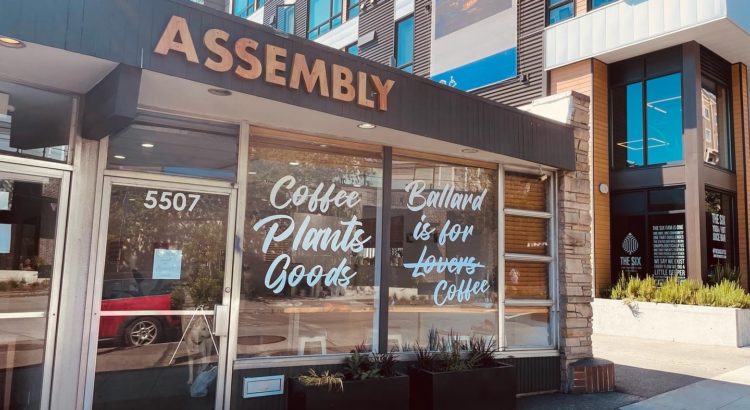 The Ballard art gallery and event space Assembly has just opened up a coffee shop inside its location at 5507 17th Ave NW.

Owner Molly Hawkins opened Assembly in Oct. 2021 as an art events space featuring local artists, taking part in Ballard’s monthly art walk. Now, the space has morphed into much more than that, serving coffee and acting as a gathering space.

Hawkins is a Korean adoptee who grew up in southwest Washington in a town called Ridgefield. She moved to Ballard in 2003 and has been in the neighborhood ever since. Her roots are in design—she owns a creative and marketing agency called We Are Unicorns.

“Since moving to Ballard/Seattle back in 2003 I have been nearly living and working out of coffee shops whether for meetings with friends, co-workers or clients, but more so to feed off of the energy and to connect with folks in a way that you don’t get to when you are just working from home or in an office sitting in a cubicle,” Hawkins told My Ballard.

“That said, coffee shops weren’t always as inviting to ‘campers,’ people looking to hang out to work or just ooze in the energy and vibes of those around them for hours,” she said. “Originally the idea of opening a coffee shop came from the desire to want to create a space that was actually inviting and welcoming to those looking for an office or home away from home.”

Hawkins describes the space as cozy, with “pantry vibes.” It’s simple, with art spread throughout the space, and a live-edge bar at the front window for seating. Soon, Hawkins plans to offer plants and other retail for sale.

Assembly is now open for regular hours for coffee and gatherings every Tuesday to Friday from 8 a.m. to 3 p.m.