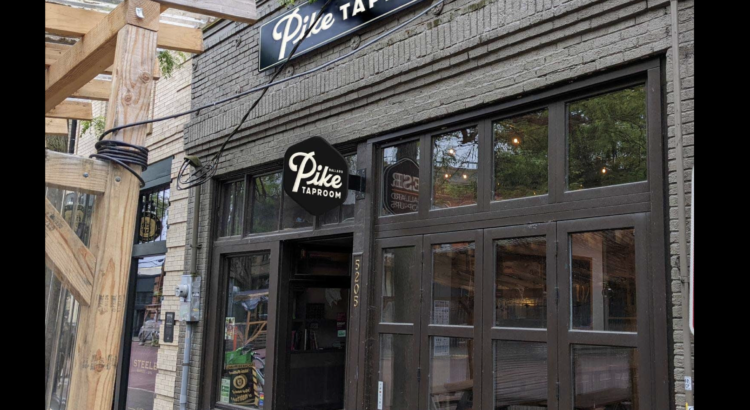 The latest taproom to come to Ballard opens its doors today: Pike Taproom will serve its first pint at 3 p.m. today.

The new taproom, located in the former Bramling Cross space at 5205 Ballard Ave NW, has a full bar with wine, canned beers, and eight taps with a rotating selection of Pike brews alongside cider and beer from Ballard breweries.

The new Pike Taproom will look quite different from the Bramling Cross days. Designer Kelley Moore added a new green leather banquette along one of the exposed brick walls and modern lighting fixtures, mirrors, and large black-and-white photos that show the history of Pike Brewing, which opened in 1989 in Pike Place Market.

The taproom seats 45 at tables and eight at the bar, which has a custom-designed brushed-metal back bar. The space also has shuffleboards, dartboards, and couches made from vintage-inspired truck seats.

“We’re thrilled to be a part of this vibrant community,” Drew Gillespie, president of Pike Brewing, said in a statement. “It’s exciting to open the doors and introduce our new and improved beers, new team, and fresh look to the neighborhood.”

Pike is releasing a collaboration beer with Stoup Brewing to celebrate the opening. It’s called New Kidz on THIS Block IPA, and “incorporates some fun hopping techniques for a whole lot of citrus, berry, and tropical aromas and flavors from Mosaic, Citra, and a touch of Sabro.”

Consulting chef Ethan Stowell crafted a menu with burgers and wings “with a twist.” Pike says they’ll have traditional burgers alongside a few signature burgers. The special burgers will include a fried fish option with panko-breaded rockfish; a Seatown Hawaiian with a beef patty, spam, Swiss, lettuce, teriyaki, pineapple, and red pepper relish; a Smokin’ Da Gouda Bacon with a beef patty, smoked gouda, bacon, crispy onions, sweet pickles, barbeque sauce, and mayo, among others.