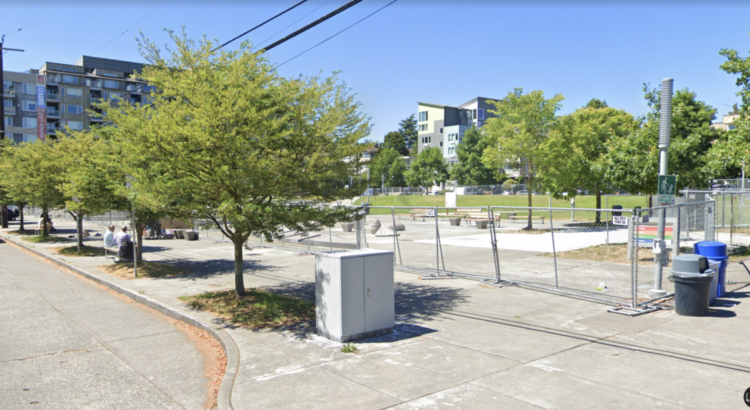 After a year of being closed to the public for renovations, Ballard Commons Park is set to reopen in early 2023.

An exact date is still in the works, but Seattle Parks says to expect a grand reopening sometime during the first quarter of the year.

The parks department has made a number of renovations and rehabilitations to the park, which closed in December 2021 following an encampment cleanup.

Renovations and rehabilitation to the park include the following:

Other additional installations that are still being carried out includes:

Rachel Schulkin from Seattle Parks says that when the park reopens, people should expect regular park concierge and busker presence, along with a schedule of park activities. They hope to see ongoing “positive communty activation” at Ballard Commons.

District 6 Councilmember Dan Strauss told My Ballard he’s working with the City of Seattle to make it easy for community members to apply for free permits for park activities.

Strauss also pointed out that Ballard Commons was in dire need of an upgrade, saying it hadn’t had much in the way of maintenance since it opened in 2005.

“We have the water features, which are good for [kids ages] 0 to 5, there’s the skate space for 15- to 17-year-olds and up, and there’s not much in between. The children’s playground will help for kids ages 5 to 10, but we still need to figure out what the 10- to 15-year-olds are going to do. We need a space at the park for them, too,” Strauss said.

“Success is not clearing a park, success is getting people inside, success is changing the way our neighborhood looks feels, and operates,” Strauss wrote in a recent blog update about the park.

“I’ve long said that our parks, our libraries, and our buses should not be homeless shelters because we need shelters and housing operating at the scale of our crisis. We need real, lasting solutions tailored to move people inside and, once there, stay on a path toward permanent housing.”

The park is very nearly ready to reopen, but Strauss said they’re still waiting on lights and benches.

We’ll update you when the city announces an official reopening for the park.