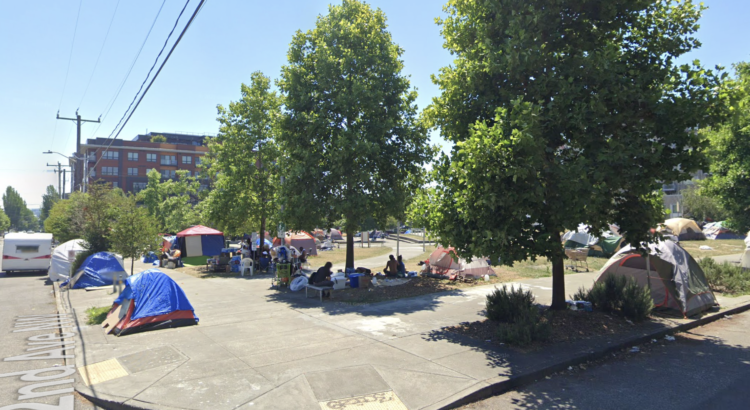 Update 2 p.m.: Councilmember Dan Strauss tells My Ballard that today’s encampment removal has been months in the making, with outreach and weekly meetings happening since July.

Strauss says what sets this removal apart is the coordinated and strategic effort to find housing for all individuals who were living in the park. In previous removals, residents were typically given just 48 to 72 hours to vacate the park, which was rarely enough time to help individuals successfully transition to shelter options.

Of the 98 people living in the park in the August census, the coordinated removal helped 66 people move into shelters, many of which are now residing in the Rosie’s and Interbay Tiny House Villages. When city crews arrived at the park today, there were just three people still in the park.

“The reason this has been a success is that we took time to coordinate and implement with a human-centered approach that doesn’t displace people,” Strauss said. “If we had used the strategies of the past, there would have been 100 people still living on the side streets of Ballard tonight.”

Original: The City is planning to clear out Ballard Commons park today.

On Sunday, Seattle Parks and Recreation staff posted a notice at the park saying that all belongings must be removed. The last time the Commons was cleared out was in April 2020 after a hepatitis outbreak.

The Seattle Human Service Department’s HOPE (Homelessness Outreach and Provider Ecosystem) Team and other providers have been working to help relocate those living in the park; KOMO reports that at least 60 people have accepted housing or shelter options since outreach began on Oct. 12.

Seattle Parks will close Ballard Commons on Tuesday to assess the park and conduct some maintenance including rodent control, replacing vegetation, fixing restrooms, and cleaning up graffiti. The parks department will store any personal items collected during the clean-up; people can retrieve items by calling 206-459-9949.

KOMO also reports that Councilmember Dan Strauss says the park will be fenced off and closed for six months to a year for renovations. We have contacted Strauss’s office and will update with any new information about the extended closure.