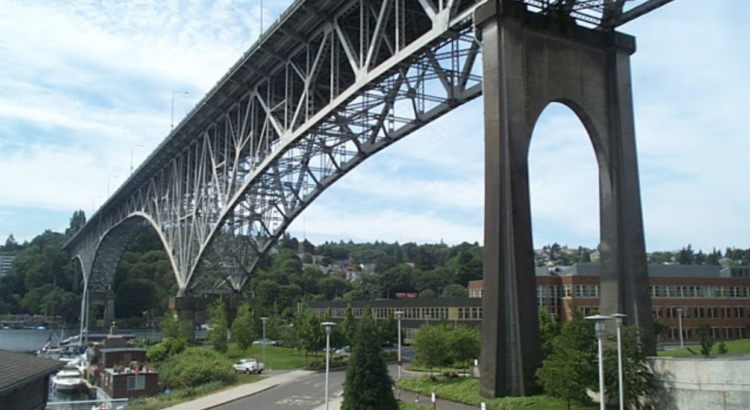 All but one lane of the Aurora Bridge will be open in each direction this weekend as construction crews continue their repairs of the 88-year-old concrete bridge deck. Be prepared for the usual traffic issues that filter down into Fremont, Queen Anne, Wallingford and Ballard. WSDOT says all lanes will be open by 5 a.m. […]

A red-tailed hawk nest temporarily foiled WSDOT’s plans to repaint the Aurora Bridge. “Though the birds are common to the area, it’s extremely rare for them to nest on bridges,” explains WSDOT’s Marqise Allen in a blog post. When the birds built the nest in April, WSDOT contacted the Washington State Department of Fish and […]

We read in comments recently (our apologies, we don’t remember who posted it) that the snow plows and sanders had inadvertently eliminated a lane from the Aurora Bridge. Today, we drove over the bridge and snapped a photo: Going in either direction, the reflectors and lines separating the second and third lanes have vanished. We […]

There’s no word if the man in his mid-30s survived the fall this morning. Fremont Universe has been covering the story.

When the Seattle band Massy Ferguson releases their upcoming CD, Cold Equations, it will feature a song called “The Ride” about a friend who jumped from the Aurora Bridge in 2006. “Don’t let it stall on Fremont Falls/just go, finish it out,” the song says, which musician Ethan Anderson said urges people not to give […]

WSDOT has formed an advisory committee and released three designs for creating a fence along Aurora Bridge that’s designed to put a stop to suicides. Someone jumps off the bridge about once every three months. Today, a man put his leg over the bridge and threatened to jump before police talked him back from the […]

People who work in Fremont in the shadow of the Aurora Bridge will be glad to know that Governor Gregoire has approved $1.4 million to build an 8-foot suicide prevention fence along the bridge. After the Golden Gate, the Aurora Bridge has the second-highest number of bridge suicides in the nation. And those suicide phones […]