With memories of happier times at Sunset Bowl, a group of former employees had the chance to take one last look. “That was our home,” the group told us in anticipation of the demolition, which is planned for later today. Barbara Church, the bar manager at the old bowling alley worked there for more than 30 years. “This place was probably my home away from home for more than half my life,” she says. Others chimed in, “mine too,” “yep, more than half my life.” Armed with cameras and flashlights, they walked into the gutted building this morning. Once through the door, it was as if they were back in the working bowling alley — they started barking old orders at each other. “Hey! I need help on lane 12!” and “Can someone clean this up!?” With laughter and teary eyes, they walked around their old home reliving days and nights they’ll never forget. Some even took souvenirs to remind them of the good old days that they’ll be talking about for years to come. They even got one last photo of employees and family members. Demolition is planned for midday today. 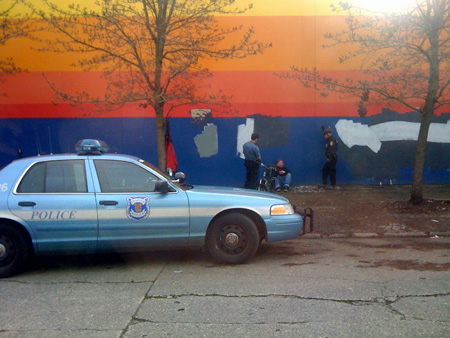 The building has sat empty for more than a year and a half, drawing a transient crowd and becoming a canvas for graffiti. Police frequently patrol the area, especially between Sunset Bowl and Ballard Market (above.) “It’s worse to drive past here and see people standing and using our doors for their restroom and all this other kind of stuff,” former employee Dawn Stewart says.

Derek Bottles with Avalon, the development company who now owns this land, says they don’t have immediate plans to build. It’s kind of how the economy is right now, he explained. When asked why they were taking the building down now, he said, “Because the neighborhood asked us to.”

RIP Sunset Bowl. You will always be missed. But thank God we're getting ONE MORE CONDO in Ballard. (serious sarcasm).

So much for “sustainable Ballard.”

I sincerely hope the developers of the condo's going up on that site are plagued with fines and delays. A pox upon them!

I was always sorry that the developer did not keep Sunset Bowl going until their new building was ready to go up. They could have been making some money, instead of just paying for an empty lot, and we'd have had the joy of Sunset Bowl for a few more years. Why don't developers rent back their new properties to the sellers, while they're lining up permits? Same could be said for Denny's. Instead of a functioning business (that is making money) we just have a vacant lot. Darn.

How about a compromise by building condos with a the bottom floor retail space as a bowling alley?! Extra sound-proofing may be required.

Because the quicker they tear it down the less chance of it being tagged as historic. Even the attempt to tag something as historic can slow the process to a crawl. The legal fees and numerous associated holding fees (financing fees, architects, engineers, land use attorneys, etc.) will eat up any potential income. Add in the possibility they will lose the development rights and the risk isn't worth it. Much of this was brought on by the pointless fight down the street to save the ugly and non-historic Dennys. Nobody won in that fight but the attorneys. The financing dried up for the developer due to the prolonged fight and the citizens now have a site comparable to a warzone. Typically this is why developers will nominate their own buildings as historic, so they can control the process and prevent reactionary NIMBY's with no understanding of the process from hijacking the complicated procedure. In short blame the coalition to keep the Denny's. Avalon saw the writing on the wall, and indeed they were correct, that someone was going to attempt to stop the project. All these delays are built into pricing at the conclusion as required to pay off all… Read more »

Guest
Sick of the mess

Great! Maybe once the building is demolished, the drunken homeless vandals will find another place to get drunk and go to the bathroom.

I know that sounds insensitive, but it's the truth.

Sick of the mess

Sounds like a good idea to me. Better than more 'retail.'

When asked why they were taking the building down now, “Because the neighborhood asked us to.”

Wow!! A neighborhood asked you to demo the Sunset Bowl??!?!

Yay. More “improvement” in Ballard.
Remember when this was a good, quiet neighborhood with small houses?
And a bowling alley where we could meet?
Now it's an endless landscape of townhouses and condos and the people are all assholes.

This has already been discussed by, considered, and rejected by the developer.

The only assholes in Ballard are the ones who didn't sell their houses for max profit while their neighbors did. They are so incredibly bitter and unfriendly its not even funny.

Don't blame the new citizens, blame those that sold out and moved.

Young people of today want to be Guitar Heroes on their computers.

A bowling alley indeed would be classified as…”more retail”. The retail is required per the zoning code.

non sequitur |ˌnän ˈsekwitər|
noun
a conclusion or statement that does not logically follow from the previous argument or statement.
ORIGIN Latin, literally ‘it does not follow.’

YES! We need another bombed out crater like site as seen at the Dennys site. MARCH WITH ME!- WE MUST NOT REST UNTIL THIS HAPPENS!

RIP Sunset Bowl, for those of us who called Ballard home, you will be sorely missed. Once again the REAL Ballard has fallen victim to its condo overlords :(

“Remember when this was a good, quiet neighborhood with small houses?”

You mean back in the mid 1850s before white people stole the land?

Nope. The site was an eyesore, and indeed, the citizenry called on Avalon to do something. See this thread:
http://www.myballard.com/forum/topic.php?id=2636

Which explains why they left it vacant for over a year and a half?

Oh yes. Condo Overlords FORCED the owners of Sunset Bowl to sell so that they could continue to lord over you Name.

So sad. Lots of great memories.