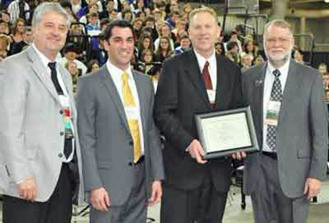 Phil Brockman, the principal at Ballard High School was recently honored for his commitment to music. Last month, Brockman (shown holding plaque) received the first-ever Washington Music Educators Association Administrator of the Year Award “for advocating music as a core quality of education,” the release from the Seattle Public Schools states. He was honored during the association’s All-State Gala in Yakima. Brockman will be playing trumpet at the alumni concert, 7 p.m., April 10 at Ballard High. Brockman helped create the alumni concert in 2006. According to the release from the school district, the event has raised $40,000 for the school’s music department. Photo courtesy Seattle Public Schools.

Well done Mr. Brockman. I graduated from Ballard High in 1971 and music was always important there. I am now a professional musician. Keep up the tradition!

I am a Ballard high graduate and played violin in the BHS orchestra under Perry Barth. My sister Marie Strom played cello in the orchestra. We have both played professionally since college. It is difficult to see what is happening to music in many Seattle public schools due to lack of funding. It is so important to keep the programs going. Many of my professional colleagues here in Seattle started playing in the public schools. We had some wonderful teachers. Thank you so much Mr. Brockman for your support of public school music!

Wow! Beautiful double whammy from Seattle today. First the news here that Ballard High is so supportive of the music program. Yay!! As a Ballard graduate (1960 to be exact) and growing up in a musical family, I so applaud the commitment and work of all who made this happen. Then, in another article I see the news about “North by Northwestern,” the book coming out about crab fishing in the Gulf of Alaska, something my dad did for 20 years. I can hardly watch “Dangerous Catch” because it's so intense and because that was the challenge our dad was in, too. The author's father died of a heart attack in 2001, and so did my dad. I honor all those who venture out into the passion of their lives — music for one, crab fishing and navigating the Gulf of Alaska for another. Thanks for the taste of Ballard today. While I celebrate our 50-year reunion in August, I also celebrate the graduation of my (musician) grandson this year — yes, from Ballard!

I am SO glad to see that music is being supported at Ballard. Coming from a musical family IN Ballard (50th reunion coming up!) and being a supporter of the arts in all forms, I applaud this major accomplishment. It is the arts that can help us balance and know our true selves, whether we are performing or simply appreciating, which as we know helps our overall performance (pun intended) in life itself. Great!! Add that Ballard story to the one about the book coming out on crab fishing and tendering, “North by Northwestern,” written by a Ballardite, I got a wonderful blast from the past today, since my father, besides being a musician, was also a skipper of a cannery tender in Alaska for at least 20 years. Coincidentally, the author's father (also a crab fisherman) died of a heart attack in 2001, as did our dad. And as I celebrate my 50th Ballard reunion this year, I also celebrate my grandson's graduation, yes, from Ballard. Whew! Time flies. And being connected to a place as special as Ballard certainly makes it all special.

I too graduated from Ballard (1962) and was in the marching band under Perry Barth. Although I didn't participate in any music programs after high school there has always been an important place in my life for band music. As Olympia Lakefair President in 1996, my theme was “Strike Up the Band”. Congratulation BHS your music program has touched many lives and I hope it continues forever. I will continue to donate to the program.

I was a member of the marching band, orchestra and band uder Perry Barth. And a graduate in the class of 1960. I am trying to reach Perry- does anyone have his phone number?
Carol Strickland

Hi Marie, do you happen to remember Greg Lundh, gregers@lundh.ca?