Syttende Mai: A local parade as old as our state – My Ballard Skip to main content For Norwegian-Americans, Syttende Mai means an entire day of fun and cultural events celebrating their heritage and history. But it’s also an event open to anyone, and is very much a community event, Sharpe said. The parade starts with units from various Norwegian lodges and fraternal societies, choruses, and other organizations, and then is followed by all sorts of units from the community, including school marching bands and clubs, the Seattle Police motorcycle drill team and the Seafair pirates. One of astounding things about the parade is its longevity.

“I think one reason that Norwegians are so patriotic is that it’s a young country,” she said. “They’re very, very proud”

Norway’s constitution was signed in Eidsvoll, Norway, in 1814, separating them from Denmark, but it wasn’t until 1905 that they really became independent and separated from Swedish rule.

For a while the Swedish king was reluctant to allow Syttende Mai celebrations, and even banned them for a few years, according to the parade committee. But the celebrations gained momentum throughout the years, and much of that enthusiasm carried over to Seattle, with its large Scandinavian population. 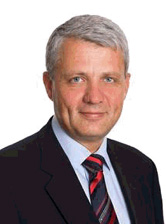 Due to the nature of the holiday, this year’s grand marshal—Dagfinn Høybråten (shown right), Leader for the Christian Democratic Party—is fitting, Sharpe said.

“It’s an honor to have a special guest from Norway and since this is the celebration of a historically political event we felt it was appropriate to have a current political leader.”

Though it hasn’t always taken place in Ballard, the celebration’s current home seems an appropriate fit. Ballard has long been a community of Scandinavians, with a lot of Scandinavian heritage and flavor.

Sharpe remembers when she’d be in Ballard and hear people on the street speaking in Norwegian.

Now Ballard is a whole different thing, she said, with Scandinavian shops closing and the older generations of Scandinavians passing away. But, she added, “you can still see a thread here an there of our history there.”

And she’s passionate about seeing it going.

“I want to pass the baton on…. I want to keep our heritage, our legacy, alive and well…. That’s why I got back into this.”

The centerpiece of the Syttende Mai celebration is always the parade, which starts at 62nd and 24th Avenue NW near Adams School, travels south along 24th to Market Street, then heads east to Bergen Place. This year’s parade starts at 6 p.m. on Monday, May 17th. In addition to the parade, Syttende Mai features a luncheon, entertainment, games for children, and more throughout Ballard. Click here for the entire schedule.