After months of harassing the Seattle Department of Transportation, a bike corral is being installed at the Jolly Roger Taproom (1111 NW Ballard Way.) 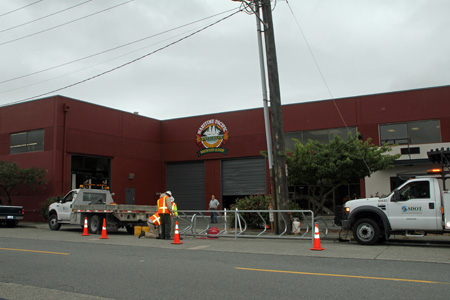 George Hancock, the owner of Maritime Brewery and the Jolly Roger Taproom, tells us that they first talked with SDOT about installing a bike corral earlier this year when they were trying to figure out bike parking at their new location. A bike corral replaces one car parking spot on the street and allows about a dozen bicycles to lock up. “As part of the Bicycle Master Plan adopted by the City of Seattle in 2007, the Seattle Department of Transportation will continue to install On-Street Bicycle Parking in Seattle,” the SDOT website states. The department plans to install six of these facilities around the city this year. (Thanks Chris for the tip!)

Yes! A big reason I never got in the habit of happy houring there is that I was getting sick of parking my bike a block away. This will bring me back!

Sweet! My favorite beer, just a bike ride away!

Oh yes! I ride my bike there all the time, Ballard is great.

Gather your guns and pitchforks and march to city hall!

They are taking AWAY a parking spot!

Actually gurple, they do not have a happy hour at Jolly Roger. But I know what you mean. Between the bike rack and the new outdoor seating area, they'll be even more popular than they are right now.

Keep your eyes peeled for drunky bikers from here on out …. 8^)

I haven't been in a while but his will bring me back.

Yes, that's all well and good, but are they members of the Ballard Chamber of Commerce?

Don't forget the businesses around the Jolly Roger that will have to close down because they can't afford the insurance being near bicycles.

So, we trade one drunk car driver with about a dozen drunk bicycle riders…

EXCELLENT! Their prices are pretty good anyway, but it will be nice to get a little discount. Thanks for the info!

Six facilities across the city? Try six on-street bike racks per neighborhood and then we are talking.

They added four long, varnished picnic tables outside the front door and the windows. They lost one parking space, but it's worth it.

would that be a bui?

Careful, it could actually be a DUI!

Section 46.61.502 of the Revised Code of Washington, which details driving under the influence and penalties, refers to people driving a vehicle. A vehicle, as defined in section 46.04.670, “includes every device capable of being moved upon a public highway and in, upon, or by which any persons or property is or may be transported or drawn upon a public highway, including bicycles.”

That is an excellent trade.

Hmmmnn…I did not know that!! Thanks for the 411 Wobbly.

But Kim, I do like your acronymn too. Might have to use that if I see a
suspected offender who is biking a little overly wobbly. ;-)

I hope their next improvement addresses the interior acoustics.

My wife and I were so excited about the reopening and after two attempts we have no desire to try again. It's a shame, the old location was so comfortable (though small).

Way to go George! This is a great local business. I've ridden my bike down there several times to fill a growler. Bike parking was significantly limited, even though on weekends there are many cyclists that ride down to the brewery. Hales sees a lot of cyclists as well, but had better bike parking. I'll be down soon to get more beer and check out the bike corral.

Awesome!! I had to lock my bike to a tree last time I went there. This will make it so much easier!