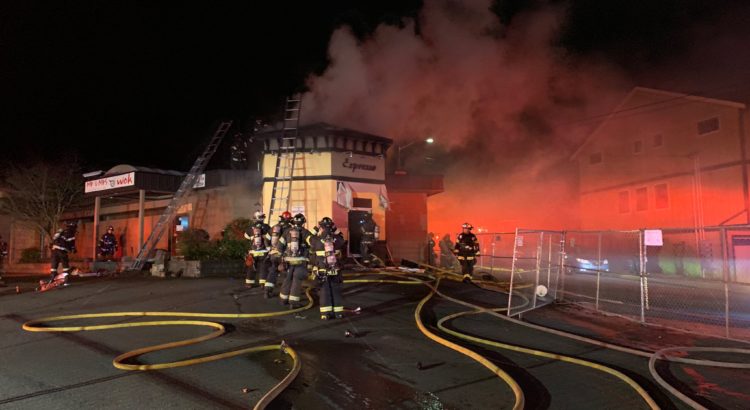 Early this morning, Seattle Fire responded to a fire at the vacant restaurant and espresso stand on the corner of Holman and 4th Ave NW.

According to the SFD, firefighters arrived just after 3am and found a small fire in the empty structure. The fire was contained, and they reported no injuries.

The building was once home to Mr. and Mrs. Wok and an espresso stand. It’s been vacant for some time, and is scheduled for demolition to make way for a 6-story, 96-unit assisted-living building with retail.

Seattle Police said there have been reports of people using the empty building, although no one was on scene when SFD arrived.

Hobos at it again?

If you mean that you are a hobo, then yes.

Can’t be. I’m afraid of trains.

Nothing will fix things and make a few feel better than good old fashioned class envy. Please define “rich” for us all here. Is that somebody making more than you? Most limitations ARE self-imposed. But alas, don’t worry, your government is working overtime to take/confiscate as much as they can from working people to non-working folks. You know, leveling the playing field stuff, choosing winners and the losers. After all, that’s their job.

But alas, don’t worry, your government is working overtime to take/confiscate as much as they can from working people to non-working folks.

Yes, we know all about the GOP giving out tax cuts to the wealthy over the past 50 years like they’re a candy dish at a bank. Pushing the financing of the country onto the middle and lower classes while the country’s GDP accumulates at the top.

“… take/confiscate as much as they can from working people to non-working folks…” if by “non-working” you mean capitalists.

Im sure the greedy bastards down at city hall are scheming to tax or fee owners of empty businesses. Seems they’d really like $500 car tabs for everybody to pay for their largess/scams. It’s us that are going to go without, or to the foodbank.

Im sure the greedy bastards down at city hall are scheming to tax or fee owners of empty businesses.

Empty businesses are a blight on society.

Homeless druggies trying to keep warm and out of the weather ????

Wow a fire just starts by itself in a abandoned building ! Very interesting !

Some people were trying for the homestead act !