King County Executive Ron Sims has released new sales tax figures which “pose one of the most serious financial emergencies” in the history of Metro Transit. How serious? As much as a 20 percent cut in bus service by next year. 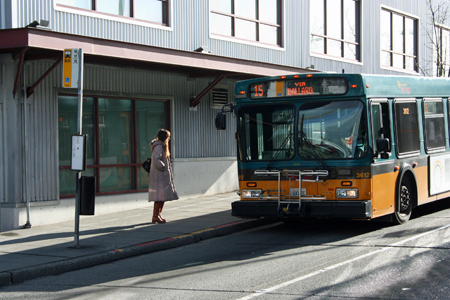 “These new figures mean we are faced with doing what nobody wants, which is deep cuts in local and commuter bus service next year that would take service levels back to the early 1990s,” said Sims. Two-thirds of Metro’s funding originates from sales tax. We’ve posted Metro’s press release below.

The new sales tax figures pose one of the most serious financial emergencies in the transit system’s 36-year history. Budget managers warn that sales tax revenues could continue to decline through June 2010. Even if the economy rebounds it would take more than a decade to build service back to current levels if service is cut.

“People are riding the bus in record numbers, yet the very service they want and need is jeopardized by the continued drop in sales taxes,” King County Executive Ron Sims said. “We’ve already cut costs by $80 million in capital, and operating costs by more than $2 million in order to keep service on the roads this year.“

Efforts taken in 2009 to address the shortfall include: drawing down reserves, cutting non-driver jobs, increasing bus fares, furloughing some workers and a variety of efficiencies that don’t directly reduce service to riders.

“These new figures mean we are faced with doing what nobody wants, which is deep cuts in local and commuter bus service next year that would take service levels back to the early 1990s,” said Sims. “This speaks to the need for a more stable source of funding for transit service.”

Metro ridership has increased by over 20 percent over the past three years. The new revenue projections for 2010 mean the potential cancellation of existing routes as well as proposed new bus routes under voter approved Transit Now, more employee layoffs and the cancellation of more capital improvements such as bus replacements.

Robust transit service is key to reducing traffic congestion and air pollution that contributes to global warming. It is also relied on by employers to meet state mandates to reduce commute trips in their work force.

In 2007 voters approved the Transit Now Initiative that funded a nearly 20 percent increase in service through 2017. However, the worsening sales tax picture means $100 million less than what was projected when Transit Now passed.

King County Metro Transit is among the 10 largest bus systems in the nation. Metro buses provide more than 118 million passenger trips a year, and the agency operates some of the largest commuter vanpool and park-and-ride programs in the country. It is also recognized as a leader in reducing pollution with its use of clean-burning fuels, electric trolleys, and hybrid buses. Metro customers consistently give the agency high marks for friendly, on-time service.