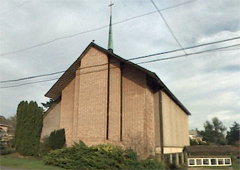 The controversial plan to move a homeless shelter from a West Seattle church to Ballard’s Calvary Lutheran Church tonight has been delayed. Pastor Steve Grumm, who agreed to host the shelter two weeks ago, sent an email this afternoon to neighbors who signed up to receive updates:

“Because we believe it is part of our mission to create partnerships with the community and to be a good neighbor, we have decided to postpone by four weeks the move-in date for the 20 men who will be sheltered in our Calvary building. During this time, we will work with SHARE to develop an agreement that defines accountability and safety. A task force has been formed to facilitate this process, including representatives from Our Redeemer’s, SHARE, and the neighborhood surrounding the shelter location.”

Grumm said the task force’s first meeting is Thursday, March 5th. Another community meeting will be held later in March. Grumm said the West Seattle Church of the Nazarene has agreed to delay the homeless shelter’s moving date, originally scheduled for today, for 7 days. “We feel a sense of urgency in completing an agreement with SHARE because we want these men to have safe shelter on these cold nights,” Grumm said.

Reminder: This story was sent out as a breaking news alert. Sign up to get your own news alerts from the Ballard area, either via email or Twitter.