Ballard’s Syttende Mai parade has always been about history. Syttende Mai – or the 17th of May – celebrates the day in 1814 when Norway’s constitution was signed in the town of Eidsvoll, Norway. 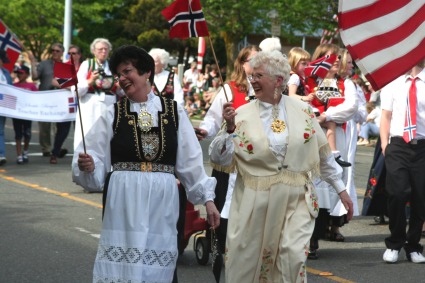 Ballard, with its strong Scandinavian heritage, holds one of the largest – if not THE largest – Syttende Mai parade outside of Norway. And this year’s celebration on Sunday is historic for a number of reasons: it’s the 120th anniversary of the Seattle Syttende Mai Committee; the 100th anniversary of the UW’s Department of Scandinavian Studies; and a restored replica of a Viking ship will sail down Market Street, at the head of the parade.

“Seattle’s May 17th Committee has been in existence as long as Washington has been a state,” spokeswoman Laila Sharpe explains.

She says Oslo, Norway, has the world’s biggest Syttende Mai parade, with Bergen, Norway, in second place. She believes that Ballard’s 100+ parade entries – with 2,000 people total marching and another 10,000 watching – makes it the third largest in the world.

“It’s kind of like the Seafair Parade; but then it’s also like a community parade. It’s quite the event. It has grown through the years to become a celebration through the community,” she says. “It’s a bit like Fourth of July for Norwegians.” (See last year’s parade here). 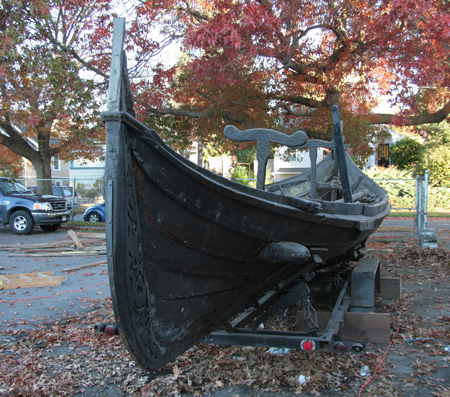 That restored replica of a Viking ship (pre-restoration photo above) is marking another important piece of history – the 100th anniversary of another Viking ship sailing across Lake Washington to dock at the Alaska Yukon Pacific Exposition at the UW in 1909. Sharpe says money from the 1909 World’s Fair help fund a lot of buildings on the young U-Dub campus, and helped start the Scandinavian Studies department.

The 200-year-old Nordic Spirit will be on display at the Nordic Heritage Museum earlier in the day and will lead the parade.

This year’s Grand Marshal for the parade is Norwegian Ambassador Wegger Christian Strommen. Honorary Marshal is Dr. Terje Leiren, Chair of the Department of Scandinavian Studies at the UW. And The Hellvik Mannskor (man’s choir) is flying in from Norway as special guests. 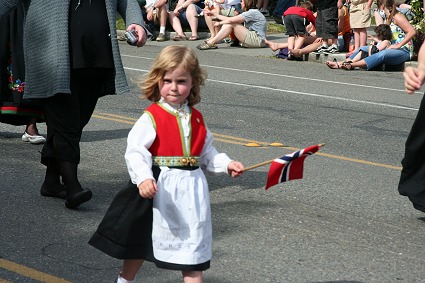 A Norwegian documentary film producer, Solvi Barber, will film the celebration. Sharpe says they’ll add some historical footage, then the film should be available on the Seattle Syttende Mai Committee’s website, and possibly at the Nordic Heritage Museum as well.

But there’s more to Syttende Mai celebrations than just the parade. Sharpe says that back in Norway, Syttende Mai is also called Children’s Day, and activities mainly focus on children, to help them know their heritage.

The May 17 celebration begins at noon Sunday with entertainment at Bergen Place park, at the intersection of Market St., Leary Avenue and 22nd Avenue from 12-4 p.m., and traditional Norwegian children’s games (or barneleker) at the Ballard Community Center at 6020 28th Ave. NW from 12-4 p.m. Games are free and all children receive an award.

A special luncheon at Leif Erikson Hall with a speech by Strommen and music by the Hellvik Mannskor is already sold out.

Norwegian Fjord Horses will be on display at the Nordic Heritage Museum from 11 a.m. to 2 p.m. before marching in the parade.

The parade begins at 4 p.m. near Adams Elementary at the corner of NW 62nd and 24th Avenue NW. The route goes south to Market Street then east to Bergen Place.

The Smilin’ Scandinavians perform from 8 p.m. to midnight at Leif Erikson Hall. Entry is free but donations are welcome; must be 21 or older.

Sharpe says that even though Ballard is undergoing a profound transformation, the Scandinavian influence is still strong.

“It’s important to keep our legacy alive, because Ballard has been transitioning in recent years,” Sharpe says. “But, we don’t want to forget our rich history.” (Nordic Spirit photo courtesy of the Nordic Heritage Museum)

If they get any of the Norwegians from the World's Strongest Man Competition, I am so totally there.

It ought to be a good event on a Sunday – yeah a whole weekend of fun – sort of – at Bergen Park and beyond.

I love this parade!

I love all parades. :-)
This is always one to look forward to. Everybody always have so much fun.

Good Lutefisk? Isn't that an oxymoron?

My grandma came from Oslo around 1890 and settled in the Pouslbo area. She ended up in Ballard and would be amazed at todays Ballard and what that (my place) house looks like today. And she actually did say uff-da. As for the parade, I was always wondering why some entries were in this parade. As in commercialism. Although, being Norwegian for a day is a good thing!

Okay, full disclosure, I am not Norwegian, just a Northern European ethnic mutt. But I do remember this old joke from when I myself first landed on the shores of Ballard twenty years ago……

How much does a haircut cost in Ballard?

Four bucks…a buck a side.

Any one know who the ladies are in the photo?

Don't know who the two ladies are, but I like to think their faces express the bitersweet irony of celebrating their fabulous Norwegian heritage in a country that's, well, less than fab. Do they regret forsaking a citizenship that would entitle them to receive petrol dollar pay-outs from the government, benefit from excellent socialized medicine, and live in one of the UN's highest-rated counties for wealth per capita, governemtal transparency, quality of life, gender equality, and environmental responsibility?
Who knows.

Norwegians are among the most heavily taxed people in the world, but I agree that they get more bang for their tax buck than we do.

Yes, they are heavily taxed like other Scandinavians, but the quality of life is fabulous in Norway. A citizen would never find himself in a situation like poor Todd- facing crippling debt for medical care.

Excellent point. That is certainly a horrible situation.

Uffda – when you accidentaly wipe your face with your lefse instead of your napkin!

This helped me for my research at school!!!

If you don't like America go ahead and leave… you're not doing anything for your country by sitting around and complaining. My sister lives in Norway and she knows that government handouts aren't the solution. I just want you to know that you live in the land of opportunity and you have nothing to complain about. Because every human has different values and opinions, there is no such thing as a perfect government.

Doree – please change your headline!! Double check your facts. The parade is on Monday, May 17th, as it always is.