At a community meeting tonight about criminal activity in Ballard parks, Seattle Parks Superintendent Tim Gallagher announced that he’s approved an exclusion zone for Bergen Place, Marvin’s Garden and Ballard Commons Park. The zone was requested by dozens of businesses owners and residents who have been concerned about drug and alcohol use, drug dealing and sexual behavior at Bergen Place and Marvin’s Garden. “This is not a homeless issue. This is a drug trafficking problem,” said Graham Graham, co-owner of the restaurant Thaiku, which is right next door to Marvin’s Garden. 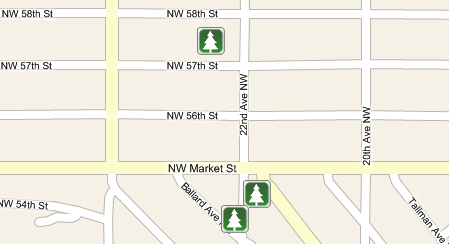 Under the ordinance, Seattle Police officers can exclude an individual from all three parks at once for violating park rules. “All this will do is, say, if you’re excluded from one, you’re excluded from two more,” Gallagher said, adding that the zone will help but not be a “solution to the problem.” Exclusions can last 7 days for a first offense, 90 days for a second and a full year for a third. Gallagher said the zone would take effect immediately, and he also promised to have a “serious discussion” about Salmon Bay Park. 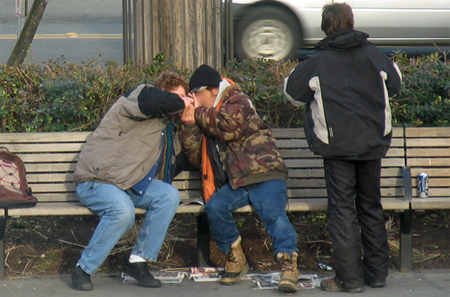 Seattle Police Sgt. Dianne Newsom, who heads up the North Precinct’s community police team, listened to concerns from residents and business owners. Some have taken photos (above) and video at Bergen Place and Marvin’s Garden and provided it to police. But because citizen photos don’t prove criminal behavior (and that’s why we blurred the face in this photo), police say they can’t make arrests unless officers catch them in the act. “Hopefully this summer we’re going to try to get more people out on bicycles,” she said, explaining that the officers can use binoculars and quietly sneak up on criminal activity. Currently, bicycle officers patrol Ballard every few weeks. When pressed for daily enforcement to tackle the drug trafficking problem, Newsom promised to take the concerns to her lieutenant.

Seattle Parks also encouraged residents to “activate” the parks by organizing activities, and members of Friends of Bergen Place said they were considering offering free WiFi. Other ideas included allowing Thaiku to set up tables in Marvin’s Garden, bringing in a food vendors, hosting concerts and coordinating with Tuesday’s in Ballard. Seattle Parks offered to work with residents on ideas, and Gallagher said he’ll plan a follow up community meeting in August.