Police have discovered the suspect’s clothing from this morning’s gas station murder, and they cordoned off part of Taco Bell’s parking lot on 15th Ave. 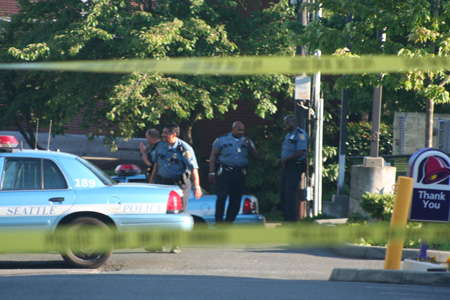 A man who lives in an apartment on 59th St. said he discovered a bag of clothing Sunday morning, but he said he didn’t think much of it because people frequently throw things over the fence from Taco Bell. “I turned on the 5 p.m. news and they were talking about the robbery and the murder,” Pat told us. “They showed the bandana on his face and his stocking cap and I go, ‘son of a bitch!’ and I ran downstairs and ran outside and it was his stuff.” He said he called 911, and police arrived a couple minutes later. 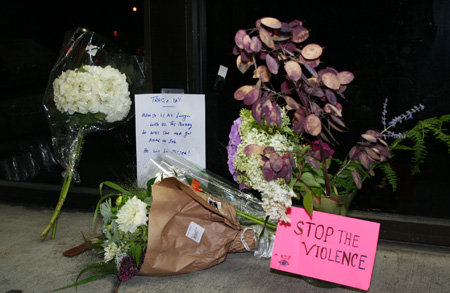 Meanwhile, the investigation is complete at the crime scene, and the gas station reopened for business Sunday evening. People are leaving a few flowers and candles in front of the business. (Thanks Lisa for the tip!)

Wow. I wonder if he changed clothes in the bushes, or just threw them out the car window?

Hope they can get some prints off of something.

I'll bet this guy has a long record, and possibly just got released from somewhere.

I'm sure he's still around. It doesn't sound all that well planned, nor he that bright. they will catch him soon. diligence people. that's how they caught the south park scum.

Maybe Taco Bell or Blockbuster have video also…seeing him without the bandana can go a long way to id-ing the murderer? This is when we can all put aside our differences and come together as a community to out this bas%$rd before he harms anyone else. Peace and comfort to the victim's family at this difficult time.

That would be extremely helpful. I hope they do.

I'll bet this guy has done other armed robberies. I hope this package will yield DNA and other clues. This is a bad dude who needs to be caught now.

Newest story with video of suspect is here:

We just posted the video on our earlier post here:

I think I've seen a camera at Taco Bell. If nothing else it's a high traffic area. Somebody has to have seen something.

It is sad to consider how Ballard has changed from the days of a teenager's bold offer (that she reneged upon) to cold, calculated murder for probably less than fifty dollars at the same location.

I will leave flowers tomorrow in memory of the gentleman that was murdered in very cold blood. My thoughts and prayers are with his friends and family. He was a hard working man and blam he is snuffed out with no respect for human life. I pray they catch this evil f___er.

We now have DNA. If he has a prior, we're in business.

Hello This was my brother- in – law that was killed so violently. Our family is forever broken now Please If anyone has any information please call 911

I'm so very, very sorry for your family's tragic loss. I realize that my words are small comfort after such a tragedy, but please know that many prayers and/or positive thoughts have been sent your way.

May his spirit find peace; and may his family find some closure. And may the killer be arrested soon.

sir,
Your family is in my thoughts. A terrible, terrible event. be strong.

I am so sorry that this has happened. I hope that the killer is found and brought to justice.

I am very sorry for the pain you and the rest of his family and friends must be going through, Komal. He was a sweet man. I'll keep him, and your family, in my prayers.

Everything that can be done will be done. I'll continue to think healing thoughts towards your family.

May moments of peace find their way to you and your family.

you sound like a hard working woman.. good for you.. hope someday you wont have to pray.. I hope the flowers will show society the respect we have for life.

I cant figure out who this is. I know the guy with the heavy accent that pulled the night shift but he seemed older than 28. There was the young guy that worked in the day that always had his dad hanging around in there but he hasn't been around since the new owners. Any help ?