First on My Ballard: A man wearing a bandana over his face shot and killed a clerk at the 76 Station and “Pit Stop” on 15th Ave. this morning, police say. The employee suffered gunshot wounds to the stomach and thigh, and he died a short time later — the first murder in Ballard since March of last year. The suspect is at large. (See photos and a description of the suspect.) 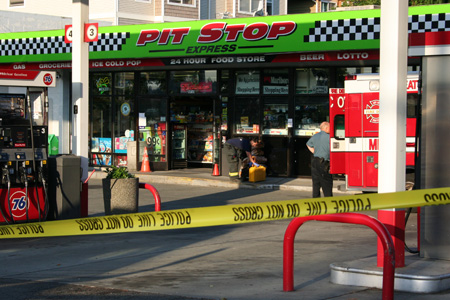 Police say they received a 911 call at 6:30 a.m. after “witnesses saw the suspect in the store with a bandana over his face.” When officers arrived, they discovered a man in his 40s with life-threatening injuries. 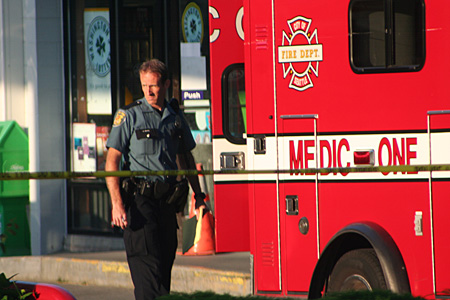 When we arrived several minutes later, medics were working on the victim inside the ambulance as police cordoned off the area. Officers also cordoned off a section of the Ballard Dental Clinic across 58th St., including the parking lot. 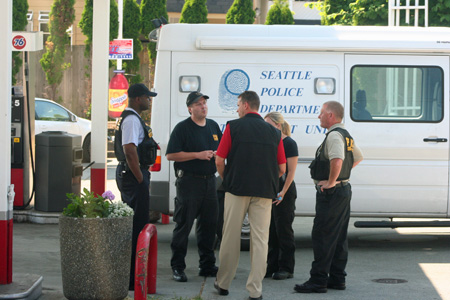 Homicide detectives and crime scene investigators arrived soon thereafter, processing evidence inside the convenience store. The owner of the “Pit Stop” briefly spoke to the media at the scene. “Everybody knows him,” Bobby Sanger said of the victim, wiping away tears. “He worked here ten years. Everybody in the neighborhood knows him.” Many My Ballard readers in comments (below) say they knew him as well. “I can’t believe this!” says J. “I’d walk down to the store and he’d tell me all sorts of stories about his family and India and the people he sees every night. He was so so nice. My prayers are with his family.” 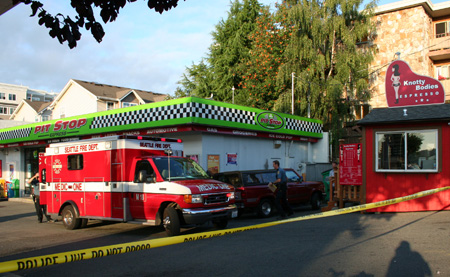 The gas station remained closed Sunday evening. Right next door to the 76 Station is Knotty Bodies, the new bikini coffee shop that opened for business yesterday. It’s also closed, surrounded in crime tape. (Thanks Silver and SeattleMedic7 for your help on the story.)

No K-9s available, so containment is being released. Containment is usually several blocks out from the actual scene.

The site is probably still cordoned off for the detectives to work it for evidence. Somebody important just arrived in an unmarked black SUV, probably Homicide. I believe they have to process the scene as a homicide in case the victim doesn't pull through.

The suspect description that I heard, was a dark skinned but not black male in his twenties, 5'5″, slim build, with a middle-eastern or Asian accent. He ran northbound, and may have gone through the parking lot of the dental building across the street to the north.

That's horrible. The vicitm will be in my thoughts and prayers.

The latest suspect description (from the security camera video) is that he was 5'10″ tall, wearing a snowboarding hat with a gold “Burton” logo on the front, carrying a small messenger-style bag. He had on a jacket with a colorful ethnic design on it, and shoes with distinctive white piping above the sole.

'Course he's probably ditched all of that by now.

I'm glad they've got video of him though.

“Course he's probably ditched all of that by now.”

I doubt it. Ever watch 'The First 48'? Most of these folks aren't the brightest of the litter.

Oh, man. The nicest guys working there too. I hope he makes it, my prayers are with him.

Agreed, NoraBell…they are always so nice there. This sucks.

a store clerk, who police say is in his 40s, was shot in the abdomen and thigh. He was transported to Harborview Medical Center where he is said to be in stable condition.

yup – really nice dudes working there. i usually see younger clerks there, so i don't know this fella ….

KOMO TV is saying the clerk died. Who has the correct info on this terrible story?

This now looks like it will be a homicide case, unfortunately. See: http://www.king5.com/topstories/stories/NW_0726…

The gas station employee was shot at least twice by an armed robber at about 6:30 a.m. Sunday in Ballard.

Police responded to the scene, the Pit Stop station at 15th Avenue NW and NW 58th Street, after a passer-by saw a man with a bandana over his face in the store and called 911.

The victim, a man in his 40s, was found with gunshot wounds to the abdomen and thigh. He was raken to Harborview Medical Center, where he died later.

The suspect fled the scene and remains at large. He is described as a a black male, about 25 years old, 5-foot-9-inches tall, skinny, wearing a black-and-white bandana and black-and-white hat.

Oh, my God. Horrible. Really horrible. I hope they catch this evil SOB. And don't let him go.

I can't believe this. I live just down the street from here. I go in all the time and the folks that work there are so nice and run such a nice little store. This is just so horrible and incredible that somebody would do this. My heart goes out to this man's family and coworkers. I'm so sorry.

My husband and I live just a few doors down from the station on 58th. I'm sure I interacted with this man many times. As far as I am concerned he was a neighbor, and this is shocking.

Oh No!!! I live one block away, and I know the victim. Well, not by name but I see him all the time…this is so sad to know…I hope that creep gets what he deserves!

wow. terrible news. i'm so sorry for this man and any friends and family suffering now.

can't believe someone would have such a disregard for life. over what? how much could have possibly been in that drawer or safe?

I can't believe this! I used to see that man all the time. I'd walk down to the store and he'd tell me all sorts of stories about his family and India and the people he sees every night. He was so so nice. My prayers are with his family. I don't understand how someone could be so selfish and careless with a life.

I agree, very selfish and cruel. I have heard most stores like this don't keep a lot of cash on hand for this reason. I hope they catch this criminal quickly.

This is sad indeed, no one wants this in any neighborhood, and the crime definitely casts a shadow on the usually peaceful Ballard. I hate to bring it up so soon, but I'm also saddened and troubled by the SPD's original description of the suspect. I realize the spokesman's description of “skinny black man” has since been retracted, but I think it's still something to ponder, and talk about at some point.

I don't see why he had to shoot him, just take the dam money and run to go buy the drugs. I hope he gets whats comming to him. Maybe he will over dose, but even thats to good for this coward.

Please, if that is what the original information was, then its their duty to report it and alter it as additional information comes in. Sometime I think people actively seek opportunities to make racial issues out of none at all.

I disagree. If the original information is not based on facts but on stereotypes or racism then we are worse off in the short run and the long run ….

You assume I'm making it a racial issue. But what about the hours lost looking for the wrong suspect? The list of reasons to not report on speculation is a long one.

They need more cameras in Ballard so at least they can track criminals to a car outside or even directly to their location. This has worked pretty well in Manchester and London in the UK.

I am so sorry for the clerks family and hope the thief/murderer is caught and the court throws the book at him.