On May 30th, a group of homeless men moved into a SHARE shelter at the vacant Calvary Lutheran Church in Ballard. As you may remember, it was a controversial addition to the neighborhood. A task force comprised of neighbors, SHARE and members of Our Redeemers Church was set up, and My Ballard received an email of the minutes from their last meeting in July. 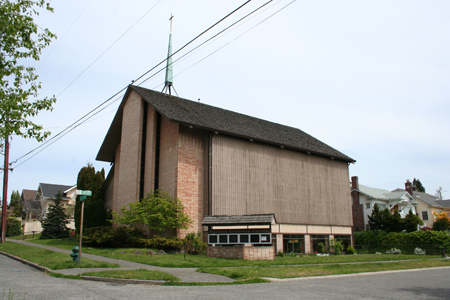 There are 13 people using the shelter, the task force reports. The turnover rate has been pretty high — likely due to the location change and the fact that shelter occupancy rates tend to drop off in the summer months. “Some neighbors have noticed an increase in family use of Salmon Bay Park and noted overall quiet in vicinity since SHARE moved in,” the minutes read, explaining that SHARE members conduct security checks in the area three times a night. There have been three reports of loitering, when residents arrive before 7 p.m. And a neighbor reported seeing a SHARE member during the day inside the 10-block exclusion zone around the church. “This issue has been addressed,” the report reads, adding that neighbors should contact Marvin, SHARE’s organizer, immediately with any rule violations.

The Ballard Food Bank is within the 10-block zone, so SHARE members are restricted from going there. People are welcome to drop food off for the residents on any evening. “SHARE residents expressed appreciation for donations of food, clothing and 2 refrigerators,” the minutes read. “Overall, things are working out great,” a SHARE member said.