Whittier students help women in Africa, thanks to One Day’s Wages – My Ballard Skip to main content 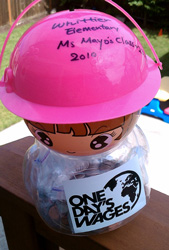 Students at Whittier Elementary are helping women in Africa through the Fremont-based non-profit One Day’s Wages (ODW).

With pennies, nickels, dimes and quarters, Ms. Mayo’s 2009-2010 first grade class donated $44.38 to help put together Fresh Start kits for HEAL Africa. That’s not a lot of money, but Ballardite Eugene Cho, founder of One Day’s Wages, says that’s what the non-profit is all about. He hopes to inspire people to donate just a little to help extreme poverty around the world. (He puts the small amount into perspective here.) “We’re average middle-class people living in Seattle,” Cho says. He lives in Ballard with his wife and three kids. “It’s the everyday person making an impact in some way,” Cho tells us, reciting Mother Teresa’s words, “If you can’t feed a hundred people, then just feed one.”

The non-profit started one year ago on Eugene’s birthday, which is no coincidence. ODW asks people to donate their birthday to fight extreme poverty around the world. Cho tells us about a four-year-old girl who has decided that instead of getting birthday presents, she wants family and friends to donate to ODW. So far she’s raised more than $1,000. ODW is unique because 100 percent of what you donate goes directly to the cause of your choice. Cho says that they raise money for administrative costs separately.

The local non-profit is celebrating its first anniversary this Friday. Tickets to the inaugural gala are $30 per person. Kids under six are free. You can get more information on the event here.