Updated: The 20-year-old man suspected of armed robbery in Ballard had a bail hearing this afternoon. The suspect waived his right to appear and listened to the proceeding from another room. 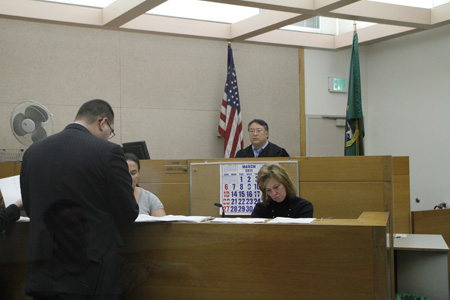 Back of defense attorney

Prosecutors filed probable cause papers for one count of robbery in the second degree and asked for $100,000 “based on the seriousness of the allegations.” The suspect has several cases pending including assault and possession of stolen property. He has also had two warrants in the last year. He has not been convicted of either crime. Because of this, the defense attorney asked that bail be set at $10,000.

“Given in what appears to be escalation in actions allegedly by the defendant and the seriousness of the allegations that a firearm was used as a weapon,” Judge Mark C Chow told the court, “Set bail at $100,000.”

The prosecutor has until Friday, March 11th to file charges.

Earlier A 20-year-old Ballard man was arrested on Tuesday afternoon and booked into King County Jail on Investigation of Robbery.

The man is suspected of five recent armed robberies and one purse-snatching in the Ballard and Phinney areas. Detective Mark Jamieson with the Seattle Police Department tells us that victims were able to give police enough of a description for them to determine a person of interest.

The latest armed robbery was on February 25th when a Loyal Heights man was confronted by the suspect, who was armed, demanding his wallet, cell phone and money. Immediately after the 10:40 p.m. robbery, the suspect was caught on surveillance camera at a local ATM trying to use the victim’s debit card, Jamieson says. Police positively identified the suspect as the person of interest.

On Tuesday afternoon, Jamieson tells us, that robbery detectives saw the suspect and a friend walking in the Loyal Heights area wearing some of the same clothing as in the ATM photos. The two were taken in for questioning. The companion was questioned and released and the suspect was arrested.

Mug shot would be nice, too.

Once the suspect is charged with the crime we’ll release the name, as is standard protocol for Seattle media.

It is public information, but they may make you hunt for it. The King County Jail has a booking roster where you can see anyone currently in custody; search by name and also booking date. If you call the court listed in the booking sheet, you can ask for pretty much anything you want (other than address, DOB, etc). The case details are public.

Given how much crap the SPD has taken of late, some warranted, some not, I would like to second the expression of gratitude. We do have good police protection in our community who do a lot with a little.

They do a lot with a little? How about we get the proper amount so that they can do the proper amount and catch these kinds of criminals sooner? I’d rather that this criminal was picked up after the first robbery and not the fifth.

“I’d rather that this criminal was picked up after the first robbery and not the fifth.”

Since you’re a law enforcement professional would like to inform us of how you would do that? What evidence present from the first robbery would you use to identify and apprehend the correct suspect out of the thousands of white males in their teens/early twenties?

I would like to see he mug shot since I was the woman in the Whitman MS parking lot that was robbed at gunpoint. I will look further. All he got from me was $20 while waving the gun around. Hey kid, have any regrets? 10 years in jail for $20?

Isn’t the suspect charged with assault and possession of stolen property via the other cases?

what an awesome photo of the defense attorneys’ back. i’m breathless.

glad this prick is off the streets for the moment….

Score one for the SPD!
Congrats on this.
We were told at a community crime prevention meeting that there was a suspect. Nice to hear of the arrest.

With the update that bail has been set, I would assume he has been charged. If nothing else, we should be able to see the ATM video.

Fortunately this kid is old enough to do some serious time. We’ll see if he actually gets more than a slap on the wrist… assuming he is guilty of course.

Can we assume he’s not one of the yuppies everyone days are ruining Ballard?

Amazing how stupid the criminal class is…..Guess that’s why they turn to crime.

This turd is once again inside the criminal justice system. Where criminals get justice. While I think many here would like to see some “street justice”, I’ d like to see him in blocks right in Ballard in Bergen park so we could all go by and “thank him” for bleeping up our community.

I hope they got their man, and that he gets his just deserts. I don’t care to know his name or see his face yet. I do want an unprejudiced trial in which the truth will out. By-the-way armed robbery used to be a felony in the old days (which meant hanging by the neck until dead, soonish too).

“The suspect waived his right to appear and listened to the proceeding from another room.”
the stupid press put him behind a two way mirror, look in the bottom left. you can see a reflection of a man, looks to be about 20.
hmmm, looks an awful lot like my neighbor

I had to search but found the name. My older kids know of him. Since I was one of his victims, I don’t feel comfortable posting it though.

Yeah, the lower left of the photo seems to present either a double exposure or a reflection.

Is that the suspect?

And I trust that the swedes will certainly release the name when they are charged.
I would certainly love to hear about the recovery of a weapon, and that the police take custody of the other(s) involved.

Thank you to the SPD, and to the judge setting a bail amount that makes sense, for once.

yeah, thanks to the spd for actually DOING THEIR JOB.

I wish people would come ‘congratulate’ me when I actually fulfill my job duties, instead of assuming I would actually do it for the money.

Here is to hoping that it was not a real handgun. I may rethink my decision to say no to giving him my wallet and phone.

I think maybe they are expressing relief that someone was caught.

So you don’t feel left out, Congratulations! those fries were awesome.