When Leo Pfeifer was 3 years old, he got his first camera.  When he was 10, he started his own YouTube channel.  And now, at 13, he’s made his first winning documentary. 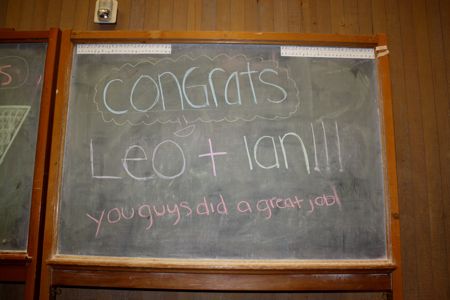 Pfeifer is a seventh-grade student at Salmon Bay Middle School in Ballard.  Late last year, he decided to enter C-SPAN’s StudentCam Documentary Competition with his cameraman and friend, Ian Derby.

Pfeifer chose a tough subject for the film: homelessness.

“Homelessness is such an important topic, and I think it’s gone to the back of people’s minds. We don’t think about it a lot but it’s around us everyday,” Pfeifer said in a phone interview.  “I wanted to remind people it’s still there and still a big issue.”

Pfeifer was awarded one of four second-place prizes for his documentary titled, “Homeless: An American Crisis.”  On Friday morning, students at the Salmon Bay Middle School piled into the cafeteria to watch the film and recognize Pfeifer and Derby.  Doug Hemming from C-SPAN presented them with their prize, a $1,500 check and a plaque.

Susan Enfield is the Seattle Public School’s interim superintendent.  “I know when I was 12, I certainly didn’t take initiative like they did.  It makes me proud,” Enfield added.

Pfeifer’s mother, Lesley, said she was impressed by her son’s willingness to take on such a difficult subject.  Leo interviewed two homeless Real Change vendors for the story.  “I learned a lot. They’re really just people like us,” said Leo.

“I think from far away they might seem really isolated from society,” Pfeifer explained.  “I think a lot of people are scared to talk to them, and if you do, you’ll find out that they’re really nice.”

Salmon Bay School’s Principal Jodee Reed said she was delighted to see Pfeifer and Derby learning outside the classroom.  “Learning should happen everywhere, and you should stick to it until you get it right,” Reed said to the crowded cafeteria.


When Hemming presented Pfeifer and Derby with the award, he said it was an “outstanding” documentary.  Indeed, out of over 1,000 entries, it was in the top ten.  “I think we have a Steven Spielberg in the making,” Hemming predicted.

As Pfeifer took the stage, he explained his motivation for making the film.  “We can’t solve issues if we’re not aware.  Awareness is the goal.”

Pfeifer plans to tackle the public school system for his next documentary. You can visit his YouTube channel, SconesOnTheGo,  here.

Congratulations Leo……….Good effort, and you also learned success has its perks. Have you gone shopping yet? Gene and Jean