Expect Ballard to be busy on Friday – it’s the KEXP Hood-to Hood 2011 – Ballard Day all day, and the bike to work after party in the afternoon and early evening. 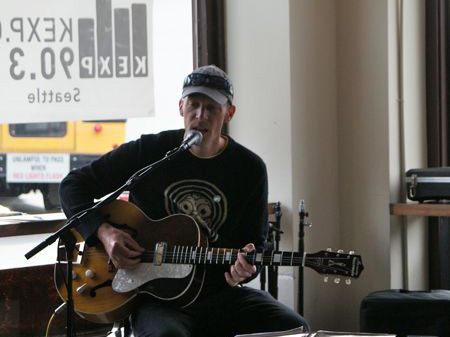 Starting at 6 a.m. KEXP (90.3 FM) will host Hood-to-Hood 2011 – Ballard Day. Last year, Ballard won the Hood to Hood Challenge during the 2010 pledge drive, bringing the music fest to our ‘hood. The station will broadcast live from The Sunset Tavern (5433 Ballard Ave NW) from 6 a.m. to 9 p.m., with acoustic performances in the afternoon at Cupcake Royale (2052 NW Market St) with featured showcases at eight different venues in the evening. Quite a few Ballard businesses will be offering discounts to KEXP members.

There will also be a food drive for the Ballard Food Bank. Bring a non-perishable food item or hygiene item to the KEXP tent at Bergen Place (5420 22nd Ave NW) from 10 a.m. to 5 p.m. Also on Friday is the annual Bike to Work Day, with a party in the afternoon here in Ballard. The F5 Bike to Work Day Street Party will take place on 22nd Ave NW between Market St. and Ballard Ave. from 4 p.m. to 7 p.m. This is also the kick-off to the Seattle Summer Streets events. “Cascade Bicycle Club transforms the heart of Ballard into a bike block party!” the website states. “Roll in after work or school to play in the streets with us!”

It’s also the NOOD regatta at Shilshole with hundreds of sailors arriving at 7 to 8 am to compete.  That goes through Sunday, with the  two weekend days expecting over 200 competitors each day.