If you’re headed to the Ballard SeafoodFest today (Sunday from 11 a.m. to 7 p.m.), you can’t miss the salmon — from the annual salmon BBQ ($10) to a salmon fundraiser, selling whole fish for just $3 a pound. 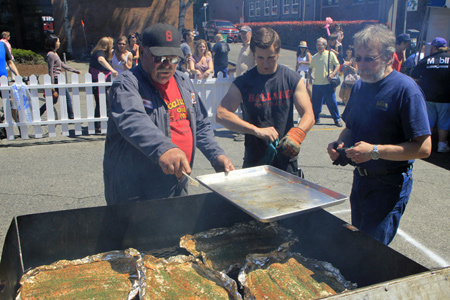 The annual BBQ is a tradition that draws long lines with a delicious alder-fired recipe that hasn’t changed in decades. This is Warren Aakervik’s 35th year overseeing the BBQ, carefully monitoring the custom-built metal cookers to ensure the salmon is cooked just right. Also helping are Doug Dixon and Cam Hardy with others from Ballard Oil, Pacific Fishermen, Camco Electric and the Ballard High School Football team. 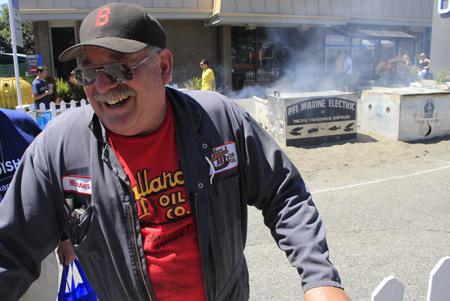 “The salmon is beautiful this year,” Aakervik told us. “The best part about it is we’re slightly behind. And when you’re slightly behind, the quality of the fish is much better.” Aakervik said the secret is to wait until the line gets longer, so the cooks are pulling fish straight off the BBQ to the plate without any delay. “It’s good, hot, moist and juicy, and just done. It’s the best.” 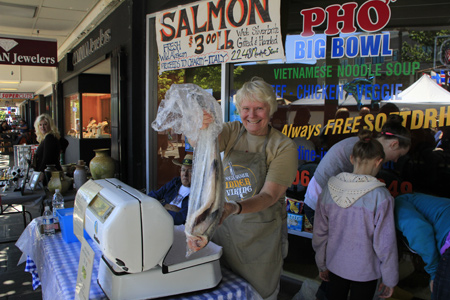 There’s another salmon secret down Market St. in front of the Pho Big Bowl restaurant. Since 2001, Bob and Janet Jones have been selling whole salmon (minus the head and insides) for just $3 a pound. They’re hoping raise $12,000 for charities in Italy, where they spent many years as missionaries. For both the salmon BBQ and the fundraiser, a generous Trident Seafoods provides the fresh fish — donating 2,000 pounds for the BBQ and 6,000 pounds (at a steep discount) for the Jones family. So head on down, enjoy a great salmon BBQ and take home a fish for the freezer.