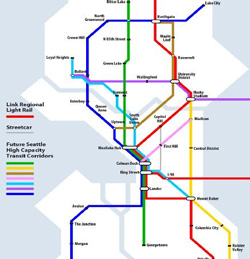 Last week we talked briefly about SDOT’s Transit Master Plan, which included plans for a light rail that would connect Ballard and Fremont to downtown, amongst other neighborhoods.

Yesterday, Seattle Mayor Mike McGinn took to his blog and challenged the Seattle City Council to “be bold” and consider funding such a project.

For the distances served — neighborhood to neighborhood — it looks like the right choice for a number of corridors in Seattle. That includes Ballard to downtown via Fremont, the University District to downtown via Eastlake, and linking those to Seattle’s two initial streetcar lines to South Lake Union, the International District/Chinatown and Capitol Hill. Other cities have already demonstrated the promise of this approach, like Portland with its MAX system.

McGinn went to say that, even if the council didn’t want to act on the initiative, he “will not stop working to fulfill my commitment to expand rail in Seattle.”

Currently, the city council is working on approving a $60 car tab fee that would help save many King County Metro bus routes as well as provide some much-needed maintenance to Seattle’s roadways. But if they want to think big, like Mayor McGinn would like them to, they might discuss much grander plans soon.

Last night there was a public hearing to discuss the car-tab fees. You can listen to public comment through the Seattle Channel here. (Click here for a larger transit map.)