Girls (4-9 conference 5-13 overall)
The Lady Beavers were fighting to keep their playoff hopes alive as they took on the Lady Bulldogs. 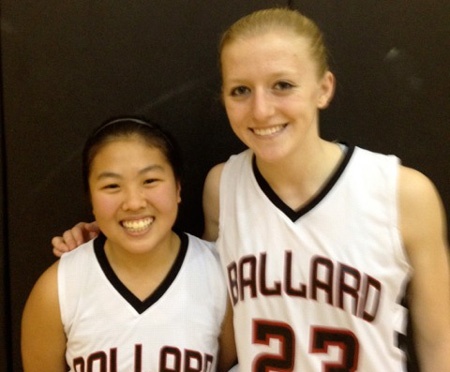 Garfield is in 4th place in the Crown division just ahead of the Beavers (top four teams make the playoffs). The two teams played just a few weeks ago with Garfield pulling out a 3 point victory at home. Before the game Ballard honored seniors Keina Ishiyama and Emma Suchland, both first year varsity players who also sport 4.0 grade point averages. The game was back and forth with Garfield winning the first quarter by four and Beavers taking a three point lead at the half. Garfield won the third quarter by two to cut the Ballard lead to 36 35 after three quarters. And then the Lady Beavers exploded in the fourth quarter led by sophomore Beverly Verduin’s 12 fourth quarter points and some clutch free throw shooting by the team. Ballard goes on to a 59 49 victory over Garfield. Beverly Verduin ended up with a game and career high 27 points on 7 of 11 three point shooting. Sophomores Nancy MacGeorge added another double-double with 16 points and 10 rebounds. Freshman Tessa Sechler got her first start of the year at point and contributed 5 assists, 3 steals and 3 rebounds. The Lady Beavers need to keep winning to make the playoffs.

Boys (6-7 conference 8-10 overall)
In the last game of the quad event at Ballard, the boys faced off against Garfield. Before the event Ballard honored its five seniors: 4-year varsity player and captain Brad Baker, 2-year varsity players Jake Devine, Luke Beutjer, and Domisi Thrash, and first-year varsity player Hudson Stylte. The first half of the contest was back and forth with Garfield going up 3 in the first quarter but Ballard bouncing back to take a 34 to 30 halftime lead. Garfield came out strong in the second half with pressure defense and hot shooting and never looked back. They went on to win 75 57. Ballard remains in 4th place in the division 1.5 games behind Bothell and has locked up a playoff spot. Ballard has two games remaining and Bothell has three including the season ending game Saturday afternoon to determine who finishes 3rd or 4th in the division. Ballard was led in scoring by juniors Seth Berger with 18 points and Johnny Verduin with 13 points. Senior Brad Baker had a season high 8 assists.

Both teams travel to Issaquah Thursday night and Bothell on Saturday afternoon.